Our conception of the "new Europe" 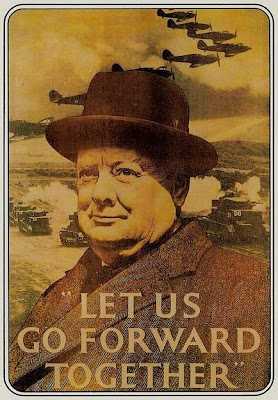 One of the great arguments between us and the Euroslime is the role of Winston Churchill in the promotion and development of the European Union. The official EU hagiography, for instance, starts with Churchill calling for a "kind of United States of Europe" in a speech he gives at the Zurich University in September 1946.

For students of EU history, therefore, it is fascinating to see that, on 23 August 1940, Churchill's War Cabinet in London agreed to set up a committee charged with making suggestions:


.. in regard to a post-war European and world system, with particular regard to the economic needs of the various nations, and to the problem of adjusting the free life of small countries in a durable international order.

The original initiative to set up the committee came from Information Minister Duff Cooper on 20 July 1940. He was responding to Hitler's plans for a "new European order" – with Cooper's idea couched in terms of offering the people of Britain and Europe specific "war aims". And here, there was a second string to the bow, because the committee also had to:


... consider means of perpetuating the national unity achieved in this country during the war through a social and economic structure designed to secure equality of opportunity and service among all classes of the community.

In approving the committee and its terms of reference, the Cabinet agreed that there was a growing demand for "some statement of what we were fighting for". We must, the Members said, make our aims clear, not merely to our own people, but also to the peoples of Europe whom we were trying to free. A time would come, they said, to "put across" our conception of the "new Europe".

Of special interest here is that, unusually, Churchill not only spoke to the item but his comments were also recorded in detail. Some of the points he thought "would be included" were that, in addition to the five Great Powers of Europe, there should be three groups of smaller States - in Northern Europe, in Middle Europe, and in the Balkans:

He also looked to see the five great nations and these three confederations linked together in some kind of Council of Europe. There should be a Court to which all justiciable disputes should be referred, with an international air force. There must be a scheme for a fair distribution of raw materials. It was also important that there should be no attempt at a vindictive settlement after the war.

Another fascinating thing here is the timing. This is at the height of the Battle of Britain. Nazi bombers and fighters are storming over the coast each day, hunting down RAF airfields, factories, and convoys – with Fighter Command supposedly on the verge of extinction.

Later on this day, the Germans bombed suburbs of London. Yet not for one minute do you get any sense of crisis as the politicians of a nation supposedly expecting invasion at any moment calmly assert that there should be no "vindictive settlement" after the war.