Another day, another crisis 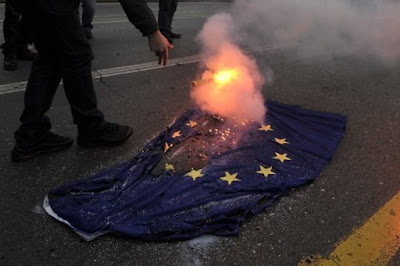 Now that he's had his fun in his toy parliament, Euroslime Dave must attend the business of our supreme masters, flying out to the ruling European Council for a meeting that the media babies still insist on calling a summit, and probably will to the end of time. There is probably no better example of the fourth estate's inability to come to grips with the realities of the modern world than this.

As you gaze in awe at the comics this morning, it comes over once again how far the babies have lost it.  They are still locked into past, the days when budget day meant something other than the politcal theatre it has become. There is one grown up on the block though - but he's not in the MSM.

Anyhow, at the real seat of power, high on the agenda will be the political crisis in Portugal. Dave will immediately be plunged into discussions on whether another bailout will be needed. The UK is variously reported as being exposed to the tune of £3 billion, to help the "colleagues" drag yet another delinquent country from the brink, in an increasingly vain attempt to save the euro and the European economic system.

The funny thing is that we got that posturing child Osborne yesterday giving his pretend budget, hailing the £2 billion he was going to extract (i.e., steal) from the oil companies, in order to "pay" for his pathetic cut in fuel duty. And here we have the very next day the cheerful little chappie having to find that amount, and fifty percent more, to throw into the European conflagration.

What will actually be going on in Brussels, though, is anybody's guess. They go through this tired ritual of issuing a communiqué, but it is long since that everyone knows it is written in advance and agreed before the Council gets under way. The actual business being conducted will bear very little relation to the label on the tin. Moreover, much of what is up front is so complicated and convoluted that most people have long since stopped taking an interest. But it's all make believe anyway - events are driving the wagon, not this motley crew.

By way of light relief, there will be some fun on Libya. The Great War Leader will be earnestly consulting with his confères in a last-ditch attempt to sort out which of the French interests should be placed first in the order of priorities. Following that, Dave will emerge, suck in his lips and look pompously important, in order to tell the hand wavers what is reely going on.

Round about his pretty little head, one would like to think that the whole financial caboodle is about to go totally awol and will soon go screaming down the Rue de la Loi like some demented Katherine wheel that has worked loose from its nail. But things never seem to happen quite that way – unfortunately. Nevertheless, this time could be different and we could be about to see the whole damn box of fireworks blowing up.

We live in hope, but not much expectation.