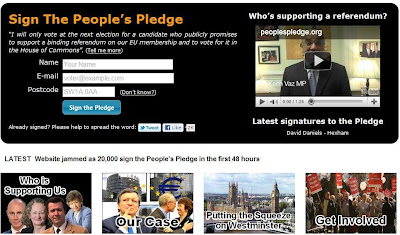 It is rather appropriate that a newspaper that has become known to its former friends as The Daily Failygraph should give space to Mark Seddon to enunciate his failed ideas. Nevertheless, it is marginally interesting to see the author of his own inadequacies actually spell them out, which we see when Seddon offers us what he believes to be the USP of his meal ticket:


This new campaign breaks with tradition because it comes primarily from the Left, includes Labour MPs such as John Cryer and Kelvin Hopkins, trade unionists and Greens, such as Jenny Jones, the party's candidate for London Mayor. Authors and writers – Fay Weldon, John King and Virginia Ironside – have come on board as well. Of course, many of our supporters want a referendum in order to vote "no" to continued EU membership, while others, such as Caroline Lucas, the Green MP, and Keith Vaz, the former Europe minister, are enthusiasts for the European Union – but agree that there should be a referendum.

One could ask why one should begin to think that having these people on board is an inducement to join a campaign, but what really blows Seddon out of the water is his bland assertion that, "A Europe-wide free trade area has become a sprawling political union, drawing huge economic and social power to its centre ... ".

In discussing something that is not and never has been a "free trade area", that always was a customs union, and always intended to be a political union, this man is showing that he does not have the first idea of what he is talking about, and has never bothered to learn.

What saddens is the fact that the Failygraph prints such tosh, but then that is why it has become the Failygraph. One would like to think that, in days or yore, wise and knowledgeable sub-editors would have picked up these sorts of error – although I suspect I would have been disappointed.

However, Seddon has basically shot his bolt. Short of starting yet another campaign, he hasn't much more to offer – and certainly, on current form, has nothing to offer the Eurosceptic cause. This is a man who, in a debate, would be an embarrassment, although that probably assures him a long and profitable association with the BBC.

But then, if this is truly a man running an organisation whose website crashes on 20,000 hits in 48 hours (and is proud of it), then a truly glittering career awaits him in government service. He is wasted on mere Euroscepticism and it would be a shame to hold him back.