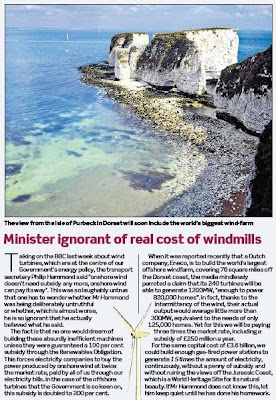 Ah, it's so rare you get to do such descriptive alliteration like that – I just couldn't resist the temptation.

This is the first instalment of Booker (I'll do the rest later today), which has as its headline: "Transport Secretary Philip Hammond reveals his ignorance of wind power". I think mine's better, even if his is more accurate.

Anyhow, what brings us to this parlous state is not merely that Hammond opened his mouth. It is that the quality of his tosh has reached new depths of depravity, occasioned when the man talked on the BBC last week about wind turbines.

This the man who is supposed to be in charge of transport policy, which could be taken as an excuse for being pig ignorant, but this is above and beyond the call of duty. No village idiot was put to such a demanding test, to prove his qualifications for the post, than the minister who then says: "onshore wind doesn't need subsidy any more, onshore wind can pay its way".

This, as Booker writes, was so laughably untrue that one has to wonder whether Mr Hammond was being deliberately untruthful or whether, which is almost worse, he is so ignorant that he actually believed what he said. Me, I think he is thick ... it is an essential qualification for prospering in the Euroslime's administration.

It is not as if the subsidy was new, but the fact is that no one would dream of building these absurdly inefficient machines unless they were guaranteed a 100 per cent subsidy through the Renewables Obligation – and double the amount for offshore.

Interestingly, an irritating little troll (is there any other sort) appends to the comments on Booker's piece that wind will become competitive when oil reaches $130 a barrel – typical disinformation from the warmist fraternity.

What it needs to catch up with is almost no electricity is produced from oil in this country, and as a result of the shale gas finds, gas and oil prices are decoupling. Gas powered stations still massively undercut wind, and will continue to do so for the foreseeable future.

Booker notes that when it was reported recently that a Dutch company, Eneco, is to build the world’s largest offshore wind farm, covering 76 square miles off the Dorset coast, the media mindlessly parroted a claim that its 240 turbines will be able to generate 1200MW, "enough to power 820,000 homes". In fact, thanks to the intermittency of the wind, their actual output would average little more than 300MW, equivalent to the needs of only 125,000 homes. Yet for this we will be paying three times the market rate, including a subsidy of £250 million a year.

For the same capital cost of £3.6 billion, we could build enough gas-fired power stations to generate 15 times the amount of electricity, continuously, without a penny of subsidy and without ruining the views off the Jurassic Coast, which is a World Heritage Site for its natural beauty. If Mr Hammond does not know this, let him keep quiet until he has done his homework, says Booker.

He is far too gentle. A man that thick should not be let out alone, much less paid a salary from the public purse.