The real Dave stands up 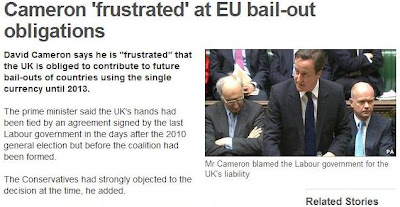 Euroslime Dave is pleading "frustration" at having to support the EU bailout scheme, complaining that he was dropped in it by Labour, and will now have to find billions to bail out Portugal. 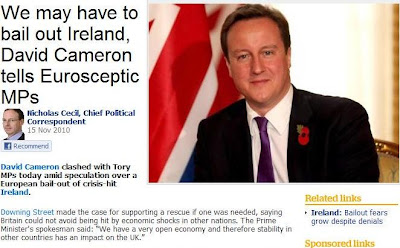 Yet, here he is in November last (above), actually speaking up for the bailout scheme, saying we have to support it. "We have a very open economy and therefore stability in other countries has an impact on the UK".

But the, if we go back to May, just when Dave is complaining that he was dropped in it by Labour, the redoubtable Bruno Waterfield informs us that the deal was set up by qualified majority voting. In other words, it would not have made a blind bit of difference whether it had been Labour or Cleggerons, the outcome would have been the same (see below).

Of course, it is a classic Cleggeron tactic to blame Labour – as indeed we got so used to hearing about eighteen years of "Tory misrule" from Labour, but in this instance, the blame lies fairly and squarely with our membership of the European Union.

And there we see the real Euroslime coming to the fore. He is quite happy to slag off Labour, any day of the week, but when it comes to his darling EU, not a word of criticism will he utter. It would never do to let the voters know that he is just as powerless as the rest of them.

But the whole spat is a con anyway. It turns out that, back in May, Dave agreed with Labour that the bail-out fund should be set up, as there was nothing that could be done to stop it. However, the poor little lad seems to forget we have internet now, so we can see exactly the games he is playing. The real Dave has just stood up - and it shows.

This is developed further by Bruno (above). Alongside The Mail, he also relays the claim that Alistair Darling, the former Chancellor, in the dying days of the last Labour administration, sought and obtained "cross–party consensus" before agreeing the establishment of the fund.

A document to that effect has now emerged (below), and we have Darling denying that, during an emergency meeting in Brussels on 9 May he ignored advice given to him by Mr Osborne. Darling says: "What we discussed was not voting against but abstention, recognising that Britain could have been outvoted". 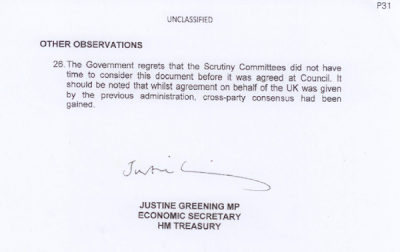 In response, Euroslime Dave tells us: "I have had a full discussion with the Chancellor about this issue and he was absolutely clear it was not something Britain should agree to". But that version is not incompatible with the above. We were all clear at the time that we should not agree to this, but it was also clear that we had no option but to agree with it.

This is happening all the time under QMV, and way back we have noted the process. When it becomes clear that the UK will be outvoted, as a matter of policy, our administration always votes for a measure, even though it may disagree with it. This goes back to the days of the UK needing to show it is communautaire, avoiding the "awkward partner" label.

Nothing, therefore, affects the central point – that agreement required QMV and we could not stop this bail-out fund going ahead (apart from the fact that it may well have been in breach of EU law ... but that's another story).

Now Dave is having to come to terms with the reality of EU membership, and he doesn't like the idea of being seen as a powerless clone, who has to fall into line with whatever our masters decide. But that is the reality. He can scweam and scweam until he is thick, but it won't make the slightest bit of difference.

And, with The Guardian pitching in, we see that little Dave is taking flak from his own side as well – although most of the MP toadies are running for cover. We had th label for it last year.

Way back, that year ago, we were reminding the Tory tribalists that it didn't make a blind bit of difference who we voted for in the general election, as on the substantive decisions, the power resides in Brussels. All we were doing was voting for an electoral college that had the right to decide who goes to Brussels as our European Council member.

So it comes to pass. The Brussels representative in the UK has discovered who his real masters are. And if he doesn't like it one little bit, tant pis. Now he should know how the rest of us feel.