Their contempt for you is total 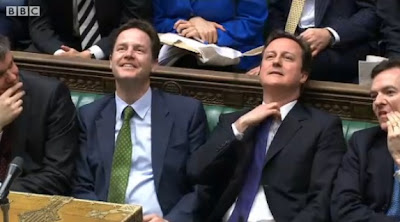 This is a few days old now, but it has haunted my thoughts ever since. There is an undeniable majority who now favour a referendum on our continued membership of the EU. When confronted with the facts, the political classes mock, they howl with laughter and they jeer. These smug, self-satisfied vermin are so assured in themselves, that they know what is best for us, that they can dismiss out of hand the one thing that broadly unites British opinion. Their contempt for you is total.

Perhaps the only thing that is as detestable, is that this is the best that Euroscepticism, for all the millions of pounds and countless man hours it has consumed, has to offer; A doddering old fool making light of the greatest betrayal we have ever known, standing to be ridiculed in the House of Commons.

And yet today, Facebook is all atwitter and Twitter is all afacebook about yet another intellectually empty campaign. With it comes the ongoing tribal spats between factions, as to whose worthless petition is more deserving of the dwindling limelight, failing to notice that if a major national newspaper does not get their attention, then nothing conventional or peaceful will.

If ever you needed evidence that democracy is dead, then what you have just witnessed is it. That is their verdict on you, your opinions, surveys and petitions. They have passed judgement on us and now we must return the favour in kind. If they will not listen then we must make them. It is the view of this blog that they do this because they do not fear us. It is time that changed. We must now make sure they do not sleep soundly.