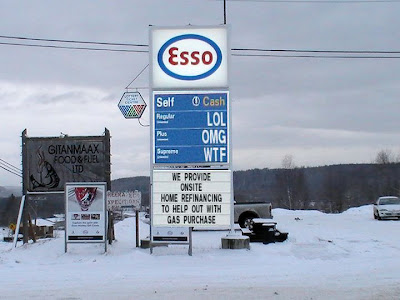 The stupid headline of the week surely has to be from the Financial Times which declares: "Cut in fuel duty placates motorists". I haven't spoken to anyone since the budget speech who hasn't treated little Georgie's "penny off" with derision. But then the FT actually tells you why that should be, in the very article that has such a daft headline:


For a two-car family, the monthly cost of filling up petrol tanks has risen by £34.40 to £283.47 over the past year, according to the AA. Motorist groups said that the cut in fuel duty would provide relief for drivers, but the average savings for families would equal just £14 a year.

So, petrol has gone up by £412.80 in a year for an average two-car family, but the average saving is £14 for the same period. And people are supposed to be grateful?

Despite its daft headline on this, though, the same paper offers a perfectly sensible story, telling us: "Ireland’s bond yields leap on default fears". The contrast is quite extreme, making you wonder whether they really have it altogether. Zero Hedge has the same story, though, telling us with delicious brevity:


Now that Europe is expected to keel over any minute, starting with the collapse of the Portuguese government, and proceeding right through the bankruptcy of Ireland, the market is starting to once again wake up. The first snooze button: Irish 10 Year bonds just passed above 10%, with numerous stops hit for the first time in history.

The Portugal story is done in more depth in The Guardian, and it's quite interesting to see Socrates in the mire once more. But having Portuguese governments go belly-up is not that unusual. And if Belgium can do without one, I'm sure they'll manage for a while.

The LA Times is amongst those now saying that Portugal will need a bailout, which could mean that Zero Hedge has got it right - "Europe" is going to keel over.  Where is Ambrose when you really need him? For the rest of us though, despite little Georgie's efforts, we need bail outs just to fill the car with petrol.