The price of ego 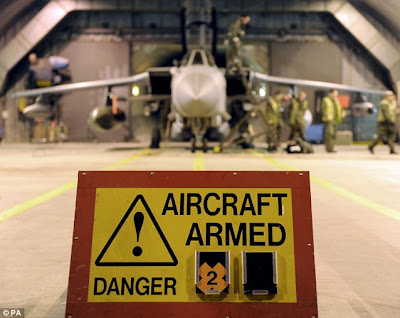 Well, little Euroslime Dave is having a ball with our money. Pics (one above) and details suggest that we had three Tornadoes on that little jolly to Libya, each carrying FOUR Storm Shadows. At a million a pop, that's £12 million-worth of tax payers' money up in smoke.

The 3,000-mile round trip, we are told, took eight hours, accompanied by VC-10 and Tri Star tankers, plus an AWACS E-3D, as a command aircraft. Currently, the running cost for a Tornado is about £45,000 an hour, and the big jets cost about the same (or slightly cheaper). In terms of order of magnitude, this amounts to a mission cost (call it the delivery charge) of just over £2 million. With ordnance, that puts the total price of yesterday's little episode at a cool £14 million.

Most of this is money already spent, but the aircraft use up hours, and the ordnance has to be replaced. Therefore, it is actually real money, that has to be extracted from the taxpayers' pockets. And it is interesting that, with all the flag-waving and trebles all round, none of the hand wavers or the babies have actually worked out how much little Euroslime's vanity trip is costing.

The interesting thing is that, spread in the right places, you can get an awful lot of leverage for £14 million.  Delivering about six tons of high explosive, at a rough cost of £1,200 per lb is about the least cost-effective way of spending that amount of money.  However, when it comes to bolstering the Boy Slime's ego, no doubt he will think it money well spent.

UPDATE 1: "Libya action hits Ryanair flights", says The Independent. The Budget airline has had to alter its flights to Sicily because of the air strikes against Libya, making room for Italy to move F-16s and Eurofighters from bases in northern Italy to Trapani, from where Ryanair normally operates.

A thought occurs. Why don't we give the explosive delivery contract to Ryanair? I'm sure they could do it cheaper, and carry passengers at the same time. Think of the flight premium they could charge ... an extra tenner to watch a Storm Shadow launched ... proceeds to the Tory Party funds. Simples. 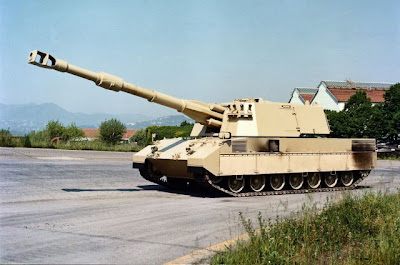 UPDATE 2: Hand waver on Sky News (see here) gaily describing an Italian-built Palmaria 155mm self-propelled gun (above) as a "tank". Knocked out by the French, this is a true example of European co-operation. The Ities sell the Libyans the kit, the Kermits destroy it, regime change happens and then the European arms salesmen move in for the next round. It all makes work for the (European) workman to do.

UPDATE 3 The babies have got in on the act as well, with another pic of this famous "tank" ... aka Italian-built Palmaria. Mind you, it has taken long enough to get the girlie boys to tell the difference between a "tank" and an APC. But it is asking too much for them to work out the difference between a tank and a SPG - that would blow their tiny little minds.

UPDATE 4: This isn't a tank either. It's a self-propelled nun.

UPDATE 5: A very sceptical look at the whole adventure, and the underlying agenda. Some interesting observations - verging on tin foil ... except, think "Pan Europa". The "colleagues" have always wanted North Africa as part of Greater Europe. The idea goes way back.

UPDATE 6: And then you have Gerald Warner: "All they are saying is give war a chance. Ticking another box on the Things To Do list, the Heir of Blair last week managed to initiate a war he could call his own".


True, Dave inherited the Afghanistan debacle, but that was a hand-me-down conflict originally the property of his hero Tony. What Dave wanted was a piece of action of which he could take personal ownership; nothing too bloody, nothing too protracted and certainly nothing too expensive - ideally, a wee pretendy war to boost his status.

Good stuff! You can see why the babies got rid of him from The Failygraph. Not sure about the "nothing too expensive" though. This looks as if it will be costing us a good few hundred million, with no end in sight.