Nuke to the rescue 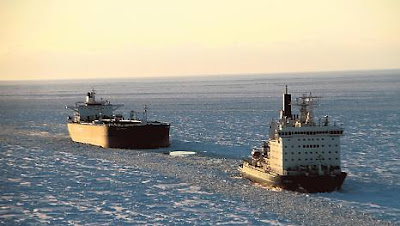 The nukes at Fukushima may be down and out but in the Gulf of Finland, nuclear power has been drafted in to rescue 63 ships stuck in the ice.

The job has proved too much for the eleven diesel-powered Russian icebreakers waiting at the country’s Baltic harbours, which has led to an historic decision. The nuclear-powered icebreaker Vaygach sailed from Murmansk on Monday to assist the trapped ships.

This follows on from the drama earlier this month and it is the first time in recent memory that a nuclear-powered icebreaker has been sent to work in the busy Gulf of Finland.

The nuclear icebreaker is spending a large part of her time assisting the passenger ferry Princess Maria that operates between Helsinki and St. Petersburg. The ferry cannot cope with the trip alone, which is why the icebreaker has to assist it in Russian waters. 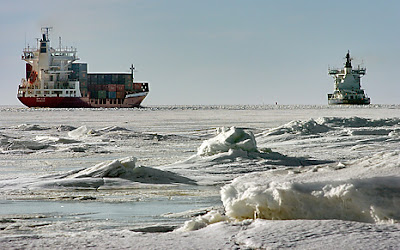 The Vaygach is an interesting ship. Built in the Wärtsilä dockyard in Helsinki at the end of the 1980s, she is one of five in the active Russian nuclear fleet. Officially designated as a shallow-draft river icebreaker of the Taymyr class, she has a crew of 91, who can be at sea for as many as seven months without a break.

However, as the vessel left Murmansk only one and a half weeks ago, the crew still have fresh fruit and vegetables to eat. It has enough fuel - namely uranium - for five years. There is also enough entertainment onboard. There is a sauna, a swimming pool, a gym, a sports hall, a library, and a recreation area aboard the 50,000 hp vessel. Playing chess and watching films are favourite pastimes.

But nothing is too good for these heroes. Combating this global warming can really be hell.