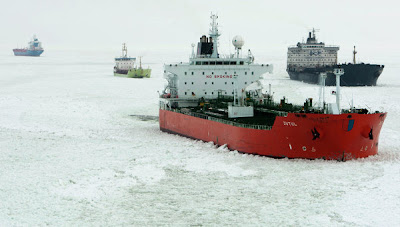 It was only just over a week ago when they were drafting in the Russian answer to Fukushima in an attempt to get their ships moving. But, rather than improving, the situation goes from bad to worse. More than 120 vessels have become stranded in ice in the Gulf of Finland, with their number growing by 20 ships every day, the St. Petersburg seaport administration has admitted.

The Gulf of Finland has been iced over for more than a month, with dozens of ships waiting for assistance because they are unable to ply their way through the heavy one-meter-thick ice floes. The situation in the gulf deteriorated last week after a cyclone from the Norwegian Sea hit the region.

A total of eleven icebreakers, plus the Taymyr-class Vaigach nuclear powered icebreaker, have been sent to the area to help the stranded ships out. As of early Monday, 121 vessels out of 135 sailing in the gulf had been trapped in the ice. Only seven ships are currently sailing through the area, moving through ice channels cleared by the icebreakers.

And nor is it just a matter of shipping. The knock-on effects are acute, with the Ford Motor Company factory located in Vsevolozhsk in the Leningrad Oblast recently forced to stop production because car components could not be delivered by sea.

The Toyota plant in St. Petersburg also stopped production for a day earlier in March. Strong winds and repeated freezing had disrupted port traffic so much that it became impossible to get the supplies through. And now those strong winds and snow over the gulf have continued to hamper shipping, and are now holding up rescue operations.

Dodgy stuff, this global warming. It was never that bad, before we got all this climate change.