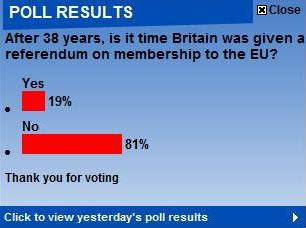 The response to latest make-work scheme for redundant campaigners seems, from the poll response (illustrated above), to be one of less than total enthusiasm.

One never ceases to wonder, however, at how easy it is to milk the Eursoceptic community with one faux campaign after another, often with the seductive cry of: "better to do something than nothing". There are far too many people thinking with their backsides instead of their brains. When you get the Speccitwats and a failing newspaper in it together, it is time step back and ask what is going on.

Interestingly, I quoted J B Priestley quite recently ("Out of the People", 1941), on the issues of activism and strategy. He wrote:


We often hear people cry: "Never mind all this writing and talking, get on and do something." The answer to that is, that at the stage at which most people in the country have arrived, writing for them and talking at them is the best kind of action. It is a change of ideas and mental attitudes they primarily need.

That is especially true now – what we need is a "change of ideas and mental attitudes".  The reason we got into the Common Market in the first place was because people were attracted by the idea ... not the practicalities ... they had no notion of what those entailed.  The way we get out is to reverse the process. We have to devise an alternative idea, a "vision" of a Britain of the future. You think of a Britain as you want it to be, a Britain that you believe would be attractive to the majority, and which is achievable.

Then you "sell" that vision. When and if it comes to an EU referendum, all you then have to do is point out that the vision is not achievable as long as we are members of the EU. In that context, instead of leaving the EU being seen as a leap into the dark, it is seen as a barrier preventing us from reaching the light. That is a winnable position.

One of our commenters got the point:


Our eventual withdrawal from the EU must come about as a natural consequence of a new national way of thinking ... a new 'ism'. Which will have gained such purchase within the hearts and minds of the nation, that continued EU membership becomes untenable simply because it is at odds with that new thinking. Withdrawal won't even require a referendum ... it'll just happen as a matter of course.

Cranmer gives it a fair outing, and offers far more thought that that idiot Myrtle, but his conclusion that it is "all we've got" simply doesn't wash. Futile gestures are still futile gestures, however they are dressed up.

If we lose a referendum, Euroscepticism is wiped out for a generation. There is too much at stake here, for us to be playing games, or allowing the agenda to be taken over by lightweights who are only after a meal ticket. Just for a complete change, let's stop being professional losers and instead consider a winning strategy. In two or three years, we could be there.