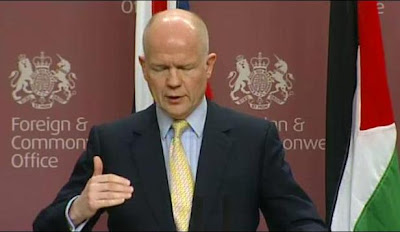 The case for continuing military strikes remained "utterly compelling", says Willie Hague. But the case he doesn't make is why it should be our military and our money which is being spent on this venture.

Nor has this pretend foreign minister given any indication as to what his administration expects to achieve for our money. "It is not for us to choose the government of Libya - that is for the Libyan people themselves", he says. "But they have a far greater chance of making that choice now than seemed likely on Saturday, when the opposition forces were on the verge of defeat and the lives of so many were in danger".

And, if as a result of his benign intervention – at our very great expense – the Libyans then end up with a new government, led by Gaddafi's former justice minister, a man with not a little blood on his hands, what then?

It seems as if we are in the process of a new Hague doctrine – not so much benign as blind intervention. We rush around lobbing million-pound bombs, chanting the mantra, "stop the killing, stop the killing", and then stand idly by while the next lot of thugs take over and ... er ... start the killing. Then, presumably, we sign an oil and gas deal with them.

One would like to think that there is more to this, some seriously Machiavellian plot that we have not been told about, but the terrifying thing about this bunch of idiots is that what you see is probably what you get. They really are that stupid, that superficial and that trite ... and, of course, they think they are sooooooo wonderful with it.

They don't seem to have the first idea how far behind they have left the rest of us, and how much on their own they really are. All you can hear is the gentle sawing of that branch, the one they are sitting on.