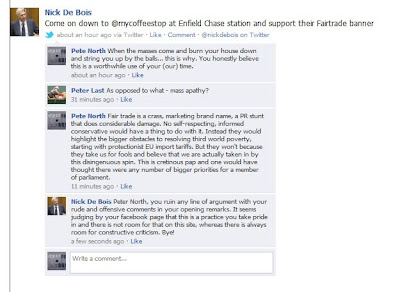 It has become something of a Sunday morning ritual to abuse an MP on Facebook. I like to select an idiot at random and poke it with a stick. This is, of course, the equivalent of picking the wings off flies or pulling the legs off spiders but it's a civic duty, same as picking up a piece of litter and putting it in the trash.

This week's victim is Mr Nick De Bois, whose Facebook we linked to earlier in an earlier piece. After a casual shot across the bows (pictured) he clicked the old "remove from friends" button. That an MP can do this without the aid of a parliamentary social media tsar came as something of a surprise. But since I was so lacking in respect for the poor little darling, I decided to offer him a piece of respectful, constructive advice...

Having completed their weekly shop they will turn to the Sunday papers to discover that our navy is being cut back to what amounts to a fisheries protection fleet and our air force being scaled back to half a dozen Tucanos and a university gliding squadron.

They will see editorials marking events of the last few weeks whereby the EU has overturned a number of our laws. They will see news of massive redundancies while council chiefs take home half million salaries and massive sundry payouts and perks.

They will see news of Chinese warships in the Med while the Middle East is on fire and wonder where is our aircraft carrier? They may also pick up on one of the many stories published lately that the era of cheap clothes and consumer goods is over. They will also note that we are looking at a full blown energy production crisis.

Meanwhile we see public sector cutbacks while Essex Police can afford roadblocks to check that people are not smoking in their company cars. And the less said about our justice system the better.

And what do we see on Facebook this week? An MP exalting the virtues of wind turbines and electric cars, a Lib Dem MP reporting her success in managing to have a bus stop moved, and there's you and your Fair Trade antics. There seems to be a massive gulf between our reality and yours.

Now I'm sure in the Westminster bubble they tell you you are doing a marvellous job but outside the M25, I hear people talking. I can tell you this for nothing; They are not talking about Fair Trade.

You as part of our political class seem perpetually engrossed in trivia. Of late it has been the AV referendum (a disingenuous electoral decoy if ever there were one), shifting daylight saving time and this week, changing the date of a bank holiday.

And then when challenged on this, even in the politest of terms through the various official means of communicating with politicians, we are fobbed off with boilerplate politico-speak stonewalling and predictable drivel.

So please do not be at all surprised if some of us are beyond speaking in a respectful tone to our elected representatives. As some of us are contemplating fighting bailiffs off our doorsteps with sharp objects we will not be so forgiving when it comes to our MP's who prattle on about fair trade, especially while our country slowly but surely degrades to the status of an Eastern European basket case.

After your idiot boss has finished playing king, the electorate will probably return a labour government, which will demonstrate to the vast swathe of voters, who now see none of you as fit to govern, that our democratic system is no longer working and a more direct means of ousting you may be required.

On that day, we will remember you. You may not see it but MPs are on dangerously thin ice. I suggest you and your colleagues give that thought some serious consideration.

You may enjoy the luxury of clicking "remove from friends" on Facebook to avoid reality intruding, but out in the street, the rules are a little different. There's nothing quite so dangerous as men with nothing to lose.


I don't think I made his Christmas card list.