Put not your trust in governments 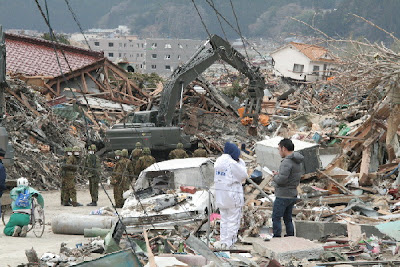 This haunting tale Takata, a town that failed to heed the lessons of history:


"From the top floor we watched everything get swallowed," 73-year-old Tsuyoshi Kinno said. "People relied too much on the order and bureaucracy. They became too obedient. In the olden times they would have just got straight to the mountains, to higher ground."


... if you rely on government, its neglect may kill you, and having done so it will lie and deceive to obscure its actions and its responsibility for them. Salvation lies not in government but in making government conform to the wishes and needs of the people. Government is a poor master. But it can be an adequate servant, if forced to be so.

Self reliance, healthy scepticism, a good understanding of history, and a strong-dose of bloody-mindedness – are the essential survival traits in this world. We need a system – which we are now going to have to devise – which enables us to make government do what we want, and not the other way around.

Are we therefore talking about "realism" for our new "ism" – perhaps "newrealism" (one word)? Do we need to play with the word - such as turn it into "nurelism"?

Whatever we call it, this would have as its basic philosophy a rejection of the modern fantasy that government is a force for good, treating it as a necessary evil which must be constrained and tamed: our country; our government; our decisions - ours, not yours.

And there's our slogan: "ours, not yours".