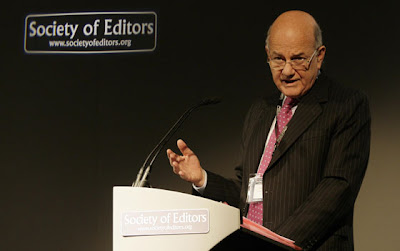 Judge Judge, the chief judge (I kid you not) is telling us that he and his mates are "not guilty" for the barmy rulings made under European human rights law.

There is that little thing called the Human Rights Act in 1998 that incorporated the European Convention on Human Rights in to UK law. And that was passed by, er ... parliament. So if the politicians don't like what's coming out of the courts, then it is up to them to change it. Except, of course, that they won't.

Judge Judge was on less secure ground – metaphorically speaking, as he was addressing the Hebrew University in Jerusalem, in a speech entitled "The Judiciary and the Media" – when he warned against overt criticism of judges by journalists.

He said undermining confidence in the judiciary within the community could lead to its independency being diminished by politicians. An independent media was as important as an independent judiciary, he said, but judges were often unfairly criticised for imposing a sentence in accordance with sentencing principle, or guidance, or statute.

So, it seems, Judge Judge doesn't want hacks to complain about judges who don't act independently, because they've been hamstrung by a sentencing principle, or guidance, or statute - in case it diminishes their, er ... independence. Judge not Judge Judge, would appear to be the watchword.