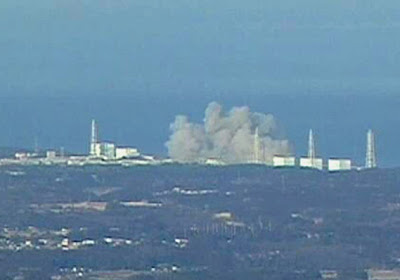 I was quick to bow out of reporting on the Japanese earthquake yesterday, remarking that this was an area where the blogs could not immediately complete. Unless there, actually on the scene, it is difficult for us to be anything other than derivative, lifting other people's work without offering any significant added value.

The issue that may emerge as one which will need the greatest analysis may be the nuclear reactor at the Fukushima Daiichi complex, where the chances of a release seem high. Even with the death and destruction around, this is getting special attention. It may have a significant impact on the ongoing energy debate. You can bet that the greenies will exploit any problems to the maximum extent that they can.

On a broader canvas, in suggesting that the blogs are not best equipped to pursue the earthquake story, one also looks at the print editions of the newspapers today in the newsagent. Then reluctantly buying one of them, one wonders why they bother with their style of reportage. In a fast-moving story, theirs is all yesterday's news, already left behind by television and internet coverage. Anyone seriously interested in keeping informed will rely on those sources, rather than tired – and space-limited – newspaper copy.

All the copy really does is reflect the media tendency to obsess about the hystérie du jour (not that Japan is hysteria, per sec - we are talking about the media response). They tend to clear the decks and report only on one thing at a time, and very little else.

One might have thought that a true and effective role for newspapers is to "watch our backs", monitoring all the news and events - not just those on the telly - informing us and reminding us that, even with the tragedy and disaster of Japan, there are other things going on in the world. However, keeping a sense of perspective, and being able to follow multiple agenda, is a sign of maturity which seems to have evaded the media fraternity.

In that context, I don't know how many readers picked up from my last ruminative piece, the apparently bizarre behaviour of MPs in the situation I raised. There we had London in flames, with what was possibly one of the most dreadful periods of the war in that particular locality, and we had this group calmly discussing "war aims" – the way things should be when the war, at some time in the unspecified future, was over.

Actually, though, the behaviour was neither bizarre, nor even in the slightest bit irrational. There was nothing else the MPs could or should have been doing to address the immediate situation. And part of their jobs – an important part – was to look to the future. It came under the heading, "life goes on" – the routine and not so routine tasks must go on regardless.

For me personally, this is a particularly difficult time, for precisley that reason. With everything going on around me, life has to go on. In the latter stages of writing my book, this is turning out to be one of the most complex – and time-consuming - pieces of writing I have ever done. I have an issue here which is actually, incredibly topical and one of enormous and current political significance, which has been neglected and mistreated through the decades, distorting our perception of who we are, and of our politics.

Stuck in my groove, however, I can quite see why past writers have taken the line of least resistance, and gone for highly simplistic – and thus heavily distorted – versions of history. Dealing with the reality is so complicated that, for many, it is obviously too difficult and not worth the effort.

What we have in the story I am writing is an amalgam of at least five separate strains – making it almost like a soap opera with several plot lines running simultaneously – each interacting and affecting each other. How much simpler it is to write of just one plot lines, ignoring the others and their interactions. Simple it is though, but very far from reality.

The complex mix that I am synthesising tells me that the Battle of Britain about whiich I am writing is very different from the one ablout which we read. What we saw fought in 1940 was a battle that is still being fought today. It was far more of a political than it was a military event - the shooting was was just the backdrop. The distinction then was that the military issues brought the politics into high focus and created pressures for their resolution.

That was what the "war aims" debate was all about, a shorthand for the debate about the future, the nature and shape of society, and where we as a nation should be going.

As I get a feel for the subject – that only comes with months of study and almost total immersion – I am coming to the conclusion that there were two strands of the debate then. One was about how Britain should look in the aftermath of war, in particular its place in the world. Then there was a separate – but parallel – debate about how liberated Europe should look.

I am not giving anything away if I suggest that the former was largely suppressed – ruthlessly so - by Churchill. He was a man of the past, defender of the status quo, of King and Empire. On 10 November 1942, in the wake of the victory at el Alamein he famously declared: "I have not become the King's First Minister in order to preside over the liquidation of the British Empire". There were going to be no debates on war aims – no "new world order" - while he was about.

The debate about the shape of Europe, however, continued apace. Churchill could not control or suppress that. So when it came to Dean Acheson's "end of Empire" comment, the lack of debate – and thinking – about Britain's post empire role had left an intellectual void. In their bid to fill the vacuum, the political classes rushed into "Europe". For them, it was the only game in town.

That is where we are today - right now. The debate suppressed in 1940 was one we still have not had. The context has changed – instead of a post-war Britain, we are now looking at the shape of a "post-Europe" Britain. But it is the same debate - the debate suppressed has become the debate delayed. It is one we must now have.

This, after all, is the Richard Stokes prescription: it is no use fighting for a negative object. You must have a positive one. And looking at our forum on this and the many interesting contributions, the one thing that does emerge is that we have a very long way to go.

We seem to have got out of the habit of visionary thinking, of deciding on shapes, ideals and the very nature of society. But, without that, we will never be free of our chains. As we found at the end of the war, change without vision is simply to swap one set of chains for another.