The tyranny of the crowd 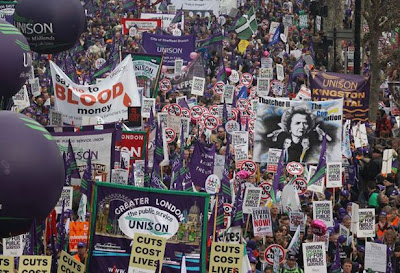 As the public sectariat go on the march to protect their grip on our wallets, Liam Halligan, chief economist at Prosperity Capital Management, asks a few questions:


Why aren't Osborne and Co. explaining these catastrophic realities [of our debt serving costs] and their impact on our medium-term ability to maintain our public services, using them to rally support for austerity measures that are long overdue? Why aren't such stark facts thrown back into the face of those who claim that the Tories' retrenchment plans are "driven by ideology rather than necessity"?

It is that latter response which caught my eye. You can treat the British public in one of two ways. Either, they are the gormless, lumpen masses of the type that we see marching today in London. Or they are thinking individuals. There is a huge overlap, the difference being between "the crowd", and the individual.

The crowd has an animal intellect, and reacts emotionally. It has no IQ, as such. Only the individual thinks – and the decisions made will vary according to whether the individual is in charge, or subsumed by the crowd psychology. "Osborne and Co" cannot see individuals. They see the crowd, without intellect ... the "sheeple" to be led by the nose and deceived.

And there, it suddenly occurred to me why they do it. Because they can. Voting, although done in the privacy of a polling booth, is a "crowd" activity. People don't vote. The "crowd" does. And that's how the likes of Osborne and Co get elected in the first place. The get elected by the crowd.

How you change that, I don't rightly know, but if we can't change the electorate, we have to change the system. Otherwise our politicians will continue to have a lack of respect for our intelligence and, as we observed, will continue taking the piss.