Not even an airshow 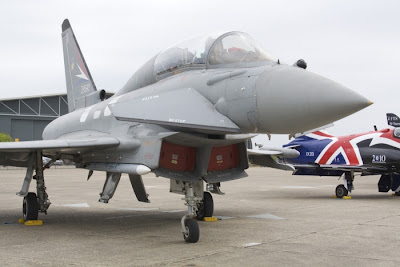 The RAF risks running short of pilots for operations over Libya as cuts to the defence budget threaten to undermine front-line operations, says Thomas Harding of The Daily Telegraph.

Since the conflict began, a squadron of 18 RAF Eurofighter pilots has enforced the Libya no-fly zone from an air base in southern Italy. However, a shortage of qualified fighter pilots means the RAF may not have enough to replace all of them when the squadron has to rotate in a few weeks.

The situation is so serious that the RAF has halted the teaching of trainee Eurofighter pilots so instructors can be drafted on to operations. But it gets worse. The handful of pilots used for air shows will also be withdrawn from displays this summer.

That has to be the ultimate pits ... the RAF can no longer even run an airshow.