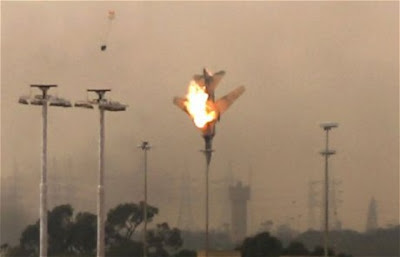 You can tell that the situation in Japan is under control, simply from the headlines ... or the absence of them. Now that Fukushima hasn't blown sky high within the attention span of a retarded gnat, the babies of the media have moved on to play with their latest hystérie du jour.

It is The Times here which leads the way with a portentous headline, redolent of the darkest days before the Second World War: "The Storm Gathers", as the media shows pictures of a Libyan jet crashing and burning (or it could be a jet-on-a-stick, which they've set fire to?) and action pictures of French AlpaJet trainers, for heaven's sake.

Are we on the brink of world war? Does Armageddon beckon? Nah ... we have a poxy, two-bit dictator in a poxy, fly-blown strip of desert, taking the piss and – as Arab dictators always do – slaughtering his people. And we are to send in a clutch of aeroplanes and maybe do a bit of derring do, on a scale that wouldn't even make a decent Sunday afternoon airshow.

But that's the babies of the media for you – incapable of reporting the news accurately or honestly, totally losing it when it comes to a sense of proportion and out to lunch when it comes to reporting anything complicated or which requires intelligent analysis.

Meanwhile, Spiked online adds it weight to the litany of condemnation of the babies, while Kevin Myers in the Irish Independent puts the boot in, but in a measured and informative way:


Irish residents in Japan have been emailing me accounts of the incredible calm and social concern of the Japanese people, and their own disgust at the foreign media frenzy, which is making it seem as if the entire archipelago is in danger of "nuclear meltdown".

But the dogs have barked and the caravan has moved on ... already the BBC stars and the forty or so reporters and the hundreds of hangers-on will be packing up in Japan and booking their passages to some warm Mediterranean location, where they can spout their breathless garbage, endlessly waving their hands in approved BBC fashion, to emphasise their vapid mouthings.

And nothing they say can be trusted – nothing they say is of any value, until it has been checked, compared, the sources examined and the implications discussed. From useful sources of information, the collective media howl is just noises off – raw, unprocessed outpourings adding to the background noise.

Occasionally, I have had doubts about the value of blogging. Not any more – we are small, only slightly insane, but by comparison, a haven of calm, clinical analysis. And that, dear readers, is a measure of how bad it has become.