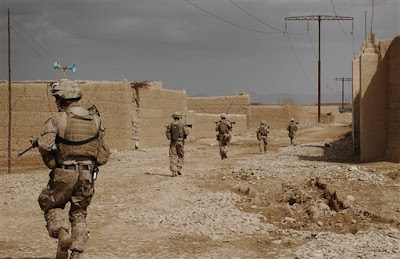 I wrote this on 16 August 2009 – arguing for an engineering solution in Sangin, where the setup of the town prevented effective or safe policing. Over 100 soldiers have since died there - I've lost count. And now, yesterday, we read this:


In a war where winning the hearts and minds of Afghans is the ultimate goal, damaging homes with powerful explosives and bulldozing a mosque and scores of other buildings may not sound like a wise idea.

But U.S. Marines in this key Taliban sanctuary say that's sometimes the only way to make progress, even if it risks angering the same people whose loyalties are required for success — a difficult trade-off that troops have grappled with throughout Afghanistan.

"We are here to rebuild, but sometimes that takes destruction," said Capt. Matthew Peterson, a company commander whose Marines were tasked in late December with clearing a key part of southern Helmand province's Sangin district.

The whole piece is worth a read – it is not very long – and then my piece linked above. What is particularly depressing is the experience at Wishtan – about which we wrote, on many occasions, where too many British soldiers were killed.

This current article tells us that the Marines initially opted not to use the base at Wishtan — part of a broader strategy to free up troops to do more patrolling. But they eventually decided it was critical to controlling key terrain, forcing them to launch their own operation to clear the area.

Since then, the Marines have managed to keep the main road clear and have yet to suffer a serious casualty in the base since the operation began in late December. They do say, though, that fighting has dropped throughout Sangin during the winter months – as it often does.

But the fact remains that the USMC are adopting the "engineering solution" that I was suggesting nearly two years ago, and are seeing a drop in casualties – even though they have not gone to the full extent I would prefer. We need to get rid of those walls (above) - all of them.

However, in 2009, my suggestions pointed in the right direction. They went up as high as they could go at the time, but the obstacles, mainly in the minds of men who call themselves soldiers, were more formidable than any the enemy could erect. And so we withdrew from Sangin – as we had done elsewhere in Afghanistan, and before that from Iraq.

Wars are won and lost in the minds of men. We have second-rate men, with second-rate minds. That is why we lost in Iraq, and that is why we will lose in Afghanistan. In this one instance, the USMC are showing us how we could have won.

But with the people we have, we cannot win - they cannot learn the lessons. They are incapable of learning. That is why there is not a great deal of point in writing about the campaign - other than occasionally to place a marker on our journey to defeat. And that we have done in this piece today.

But, as the Boy Slime gallops off to war in Libya, would be too much to hope for that he could finish losing the last one, before he so gaily starts the next? Can't we just lose one war at a time?