Le Pen is mightier than ... Sarkozy 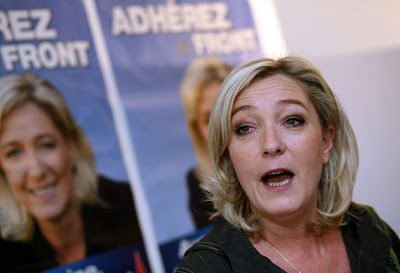 France is all a twitter after an opinion poll which suggested that the "far-right leader" Marine Le Pen could win the first round of the presidential election next spring.

Although the poll was framed in a rather dubious way, says The Independent, and one out of three people gave no opinion, the outcome was a deep humiliation for President Nicolas Sarkozy and a stark warning to his bickering would-be rivals on the centre-left.

Ms Le Pen has now doubled her opinion poll score in the space of four months – from 12 percent to 23 percent – revealing a deep anger with French politics-as-usual among voters of both the Right and the Left.

Actually, though, what's the problem here? Don't they remember their history? Does no one remember that grandaddy Le Pen won the first round of the 2002 election, and Chirac only recovered it with the slogan: "Votez l'escroc, pas le facho"? The Kermits have always had a sense of humour when it comes to elections ... but when you see the jokes they have to vote for, that is not surprising.