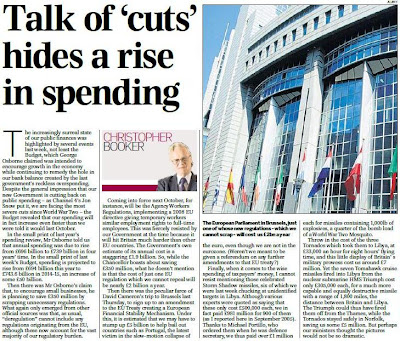 Nothing new to this blog's readers, but Booker has a go at the "increasingly surreal state of our public finances", as highlighted by several events last week, not least the Budget. There, those who could stomach listening to the preposterous Osborne, will recall that he claimed he was intended to encourage growth in the economy while continuing to remedy the hole in our bank balance created by the last government's reckless overspending.

Yet, despite the general impression that the Cleggerons are cutting back on public spending – as Channel 4's Jon Snow put it, we are facing the most severe cuts since World War Two – the budget revealed that our spending will in fact increase even faster than we were told it would last October.

In the small print of last year's spending review, little George told us that annual spending was due to rise from £696 billion to £739 billion in four years' time. In the small print of last week's Budget, spending is projected to rise from £694 billion this year to £743.6 billion in 2014-15, an increase of some £50 billion. That, of course, makes it even more bizarre that we should be throwing money at the Libyan adventure, to which effect Booker brings up the issue of the million-pound Storm Shadow missiles.

That invites a rather entertaining comment that "Baroness" Ashton's remuneration and pension package, servants, cars, homes and expenses, amount to about £1m per annum, same as the missile. Why don't we drop her on the Libyans?

If we could then enlist the RAF to drop off the 500,000 or so who were demonstrating against the "cuts" yesterday, then we might at last have found something useful for the junior service to do – even if Ryanair could probably do it cheaper.