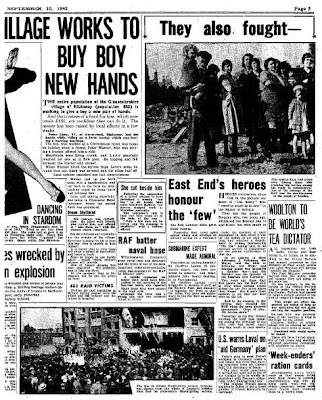 For some reason, I found myself re-reading today the pre-election statement of Euroslime Dave, published by the Failygraph on 2 April 2010. Then he told us:


The state is your servant, never your master. It should defend people from every threat – but it should not use that as a premise to infringe unnecessarily on the freedom of the individual. As far as humanly possible, it should crush bureaucracy and hand power to the people.

This is from a man who supports the European Union as a construct, a top-down, centralist organisation which regards the peoples of Europe as its own property, to dictate to as it feels fit. That Cameron cannot see the huge gap between his own rhetoric, and the reality which he endorses, speaks legions for his unfitness for office.

Howsoever, Euroslime's basic tennet is sound. In bringing the new book of the Battle of Britain close to its conclusion (I should be finished the first draft by the weekend), I found myself writing the following in the epilogue:


Summed up, therefore, the lessons of the Battle of Britain are that, if you rely on government, its neglect may kill you, and having done so it will lie and deceive to obscure its actions and its responsibility for them. Salvation lies not in government but in making government conform to the wishes and needs of the people. Government is a poor master – it will kill you with its indifference. But it can be an adequate servant, if forced to be so.

There is not a lot of difference between the two statements, except for the one substantive difference between us: I mean it, Cameron doesn't. But the problem, of course, is how to turn the theory into practice. What form of society can best communicate to its government its "wishes and needs", make it perform and yet prevent it from taking over, swapping the master-servant relationship?

In an attempt to answer that question, I spent some time yesterday listing on a piece of paper all the political "isms" I could think of, from Fascism, to Socialism, through to localism and even Humanism. Nothing I could think of precisely reflects the core political philosophy expressed in the passages cited. Certainly, the philosophy is not currently reflected in any form of conservatism of which I am aware.

Thus did it strike me that we need a new "ism". Every revolution needs one, and if we are going to take the political system apart and put it back together again, we need one as well. I have an idea that "Famulism" might do, based on the Latin for servant, thus defining the role of the state. But I am open to offers.

The pic, incidentally, is a page from the Daily Mirror on 16 September 1942. The story (top right) contrasts with the front page of The Daily Express of the previous day, and makes for a fascinating story – which embodies the essence of my own quote. More of that later.