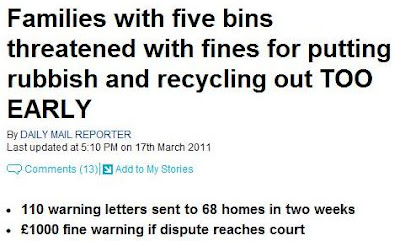 Keep this up and eventually someone is going to get killed. This is precisely the sort of thing that does it, brought about when officials forget who they work for, and get out of control. And when it happens, it isn't murder ... it's suicide.

Strangely, it is the little things that engender the blind fury ... like the unfair parking ticket, getting done for doing 32 mph in a 30-zone, a fine for putting out bin on the wrong day, or being fined for littering when you accidentally drop a tenner on the pavement. The Daily Mail is mining a hugely rich seam when it publishes stories such as these - but they all have a cumulative effect.

I don't know for certain why it should be the case that people get so worked up, although it is probable that people get most worked up about things they can relate to, or affect them personally. Thus, while the lofty bureaucrats so airily dismiss the concerns of the plebs, little do they realise that, letter-by-letter, they are writing their own suicide notes.