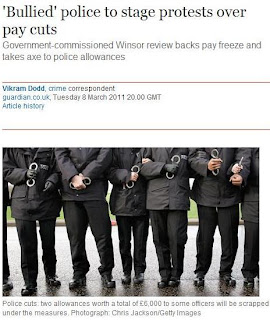 I dunno which invites more incredulity – the fact that the police are weeping in their cups about being "bullied", or that the Cleggerons, having upset just about all their natural constituencies – to the point that they need armoured cars and constant police escorts – have now upset the police to such an extent that they now want the right to strike.

All this comes on the back of the review by Tom Winsor, commissioned by the current administration, which recommends cutting back on police allowances and overtime payments, to the extent that up to 40 percent might lose £4,000 a year ... although, alarmingly, the rest would gain by up to £2,000 a year.

These recommendations have been sufficient to have members of the Police Federation's ruling council accusing the administration of "bullying demoralised officers", through "a series of swingeing pay cuts" – which makes such a delicious change from police officers bullying demoralised Council Tax payers who are having to take real cuts in their standards of living to pay for their salaries and grossly inflated pensions.

The Guardian notes that the move "further adds to momentum driving police and the government towards a clash", just as ministers rely on police officers to maintain order at protests expected from public sector workers also hit by the cuts.

Next thing we might see, perhaps, is police demonstrations, with fellow officers refusing to police them unless they are paid mega-overtime ... with the two sides swapping over at half-time. Could this be the ultimate in make-work schemes?

However, we could also be seeing giant sized chickens, with more seats than economy-rigged A-380s – coming storming into roost. No matter how just their cause, the police have exhausted their fund of goodwill from the ordinary population, to the extent that they will find no sympathy whatsoever out on the streets.

Maybe that's why the Cleggerons feel empowered to take their action, although they don't seem to realise that they are about as unpopular as the police they are duffing up. When the police turn round and return the favour, therefore, we will have the fun of cheering both sides as they beat each other up.

And how much do new irony chips cost?