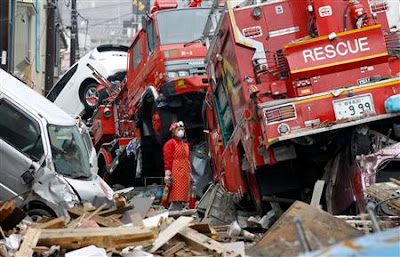 Apparently, they have run an extension lead out to Fukushima and plugged the plant back into the mains. It will be switched back on as soon as the call centre has cleared the down-payment through the bank and the direct debit has been set up.

The BBC and the other babies can now return to waving their hands and emoting about the latest group of earthquake victims they've discovered, carefully doling out the victim quota so they don't run out before the call comes to wave their hands over Libyan victims. Meanwhile, another blogger is less than happy about moronic journalists.

He's setting up a "wall of shame", but I think it would be just better to post the names of the very few journalists who have an emotional IQ of a five-year-old or higher, and an equivalent grasp of physics. Meanwhile, the babies are getting excited about the bombardment of Libya with 112 Tomahawks ... wow! Have they any idea how big that country is?

The situation is slightly redeemed by the great political satirist Matthew d'Ancona whose dry wit is so subtle that, on first read, you actually think he's praising Euroslime Dave. What a card!

Interestingly, I picked up this piece by ex-journalist David Simon. It makes some good points, but underlines the salient fact that most MSM journalists really do not understand blogging – or bloggers.

Eventually, though, the MSM is going to self-destruct, and not for any of the reasons David Simon makes out. It is going to be for the single reason that the news media has forgotten what it is for. And unfortunately, their problems can't be solved by running an extension lead out, and plugging them back in.

Meanwhile, Japanese fire truck drivers are to be sent on courses to improve their parking techniques (pictured - love the registration plate ... it has to be a coincidence ... isn't life strange).