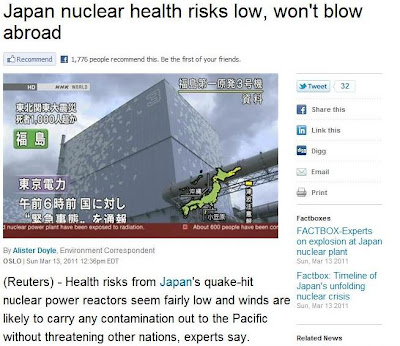 And after the hyperventilation comes this report:


"This is not a serious public health issue at the moment," Malcolm Crick, Secretary of the U.N. Scientific Committee on the Effects of Atomic Radiation, told Reuters. "It won't be anything like Chernobyl".

One would like to think that all the media jeremiahs might possibly show a little shame, but there's more chance of a Japanese nuclear reactor blowing up than that - or those irritating little Beeboids not waving their hands as they prattle. Where did they get this from?

This sad little episode, however, underlines how utterly untrustworthy the media has become. We should be able to rely on it for dispassionate, factual reporting and sensible, informed analysis - such as this. Instead, in the main, we get hysterical babies squealing about the end of the world.

We deserve better from our media than this, but we're not going to get it – not in any hurry. It's gone too far down for a quick and easy recovery. But at least a lot more people have seen the media for what it is. That is a start.