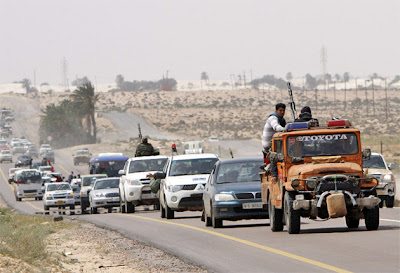 "Libyan rebel forces retreated in disarray yesterday as the battle in the east swung dramatically in favour of Colonel Gaddafi", says the Daily Mail. "Gaddafi loyalists are once again closing in on the key town of Ajdabiya, which they had abandoned on Saturday in the face of "devastating coalition airstrikes". Ras Lanuf and Bin Jawad had already fallen again".

Then you get The Independent which has the rebels in Libya "in terrified retreat", enmeshed in recriminations against their own leadership and accusing officials dealing with the international community of misrepresenting the reality on the ground.

After twelve nights of Western military intervention that had been seen as irreversibly changing the course of this conflict, the revolutionary forces had been pushed back by yesterday evening to the last city before Benghazi, the capital of the opposition provisional government, seemingly with their confidence drained and showing little will to continue the fight.

The collapse by the revolutionary forces in the space of 48 hours "was spectacular", says the paper. But what is equally spectacular is the almost total lack of judgement of the "international community", which has got itself caught up in something it does not understand, and over which it has no control.

Right up front, of course, is the most spectacular incompetent of them all, from Boy Wonder Cameron and Hippy Dippy Hague. Not only do these buffoons seem not to have a "plan B", they didn't even seem to have a "plan A" worth talking about. Now this bunch of losers wants to give another bunch of losers more guns. And I suppose they are calling this a winning strategy?

We always knew this pair was incompetent, but they really are breaking new ground. And how interesting it is that the newspapers that were so gung ho for this adventure, and had the hots for the Great War Leader Cameron, now seem to have gone silent. There's a strange coincidence.

But Hey! At least the rebels can afford the petrol.