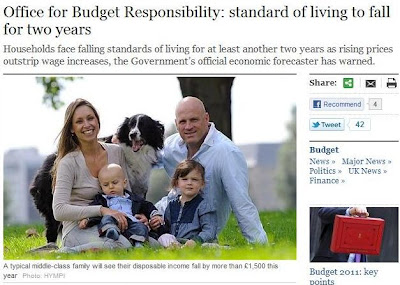 Dellers is in fine form with his latest piece: "I wrote the epitaph on Dave Cameron's Tories the day they were elected. It has been downhill ever since. And don't get me started on this bloody pointless new war…", he writes. Thus does he demonstrate, as he has been doing with a few pieces of late, that there is life after climate change, an issue which is just as vibrant and expensive as ever it was – although clearly leaving increasing numbers of people unmoved.

Nonetheless, one of the commenters on the Dellers piece adds a link to this piece, which details Georgie's new "carbon tax" in yesterday's budget, dubbed the "2011 budget for growth". This new tax is the floor price for "carbon" and is going to have a drastic effect on energy costs and on intensive energy users, such as steel-makers and metal foundries, but it has been sneaked in largely without comment, all contributing to the pressures which are going to restrict growth.

This is perhaps what really gets up your nose about the Cleggerons – their patronising lies, patronising because they tell them so glibly, with no real attempt to conceal them, in the blithe assumption that we are too stupid to understand what we are being told.

What people are very, very conscious of though is this dynamic, where they do indeed see growth – but only in inflation. They are, according to this piece, spending more and more on food and getting less and less for it. They then look at the plump, cherubic faces of the overstuffed Cleggerons and their easy lies, and dark thoughts that have no place in a civilised society start to bubble to the surface.

Add to that, this sort of thing where we see warnings that standard of living is set to fall for two years (and then some), especially as we see the details fleshed out:


In its analysis of the budget, the independent thinktank also estimated that the average household would lose £750 this year as a result of higher taxes and benefit cuts implemented by the chancellor since coming to power. "Over the whole parliament, tax and benefit changes will hit household incomes to the tune of more like 5 percent, or £1,500 a year," said the IFS director, Paul Johnson.

Listening to the prattling of the preposterous Osborne, and the rest of the Tory claque, one comes away with the inescapable conclusion that there is something fundamentally unserious about them: they are taking the piss (a thought by no means unique to us). There is no better way in the English language of expressing the sentiment and, as one confronts it, little thought bubbles start rising.

We are having to work harder, for less. And all we have to look forward to for the foreseeable is getting less and less for our efforts. Yet those plump, cherubic faces are stealing even more of our money in taxes, which they are not even honest enough to call taxes – feeding us on a diet of lies, tripping out empty slogans and facile, unconvincing promises, and making plans that unravel within days of being announced. And this is all for what, precisely?

Returning to Dellers, we see he tells us he wrote the epitaph on Dave Cameron's Tories on the day they were elected. But if they keep going on like this, the only piece of creative writing he'll need to do in future is their individual obituaries.