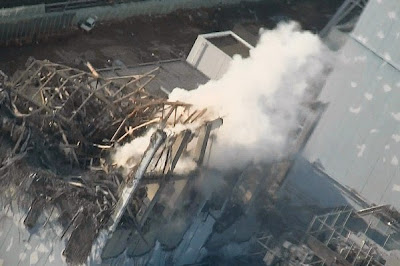 Two things have intervened in the media coverage of the Japanese nuclear plant crisis to make it misleading to the point of incomprehensible.

The one is the frequent use of the Chernobyl disaster as a comparator, where there are absolutely no comparisons with the incident at Fukushima. The second is the childish refrain of "meltdown" by scientifically and technically illiterate journalists, who seem to be incapable of understanding what is happening, yet seem determined to spread their own incomprehension far and wide.

Fortunately, a little clarity is beginning to emerge, although few press reports are without errors which could so easily mislead unless one already has a firm grasp of the basics. Thus, I am in a position of eating humble pie, having assumed that the earthquake disaster was one which the MSM was best equipped to handle.

On balance, as it has fallen prey to extravagant scaremongering, it has done an execrable job. Compare, for instance, the level-headed reporting of Captain's Journal with the hyperventilation of the babyish Daily Telegraph, which is so luridly over-the-top as to be useless as a source of information. Then we have the BBC – quite literally – indulging in point scoring. Truly, we are dealing not with children here but babies - the regression is quite alarming.

Making do with the best of what we have, one article worth reading is this one in the New York Times, and this one in the Guardian. Revolting though the paper might be, it still seems to have one or two grown-ups on its staff. Then, with very great caution, as it is littered with errors, there is the Reuters report. For some up-to-date information, have a look at this one.

Culling the detail from these, it would appear that the crisis now rests not with the reactors per se but with the "pools" in the reactor buildings used to store spent fuel rods. The storage pool in reactor 4, is said to be completely empty, and the Japanese workers are focused efforts on the storage pool at reactor 3, for reasons which do not seem to be entirely clear, but related to the fact that it is a MOX reactor and hence less stable than the rest.

It is this pool, in reactor three, on which helicopter crews and teams of police officers in water cannon trucks, together with fire trucks, have been trying to direct water, in an attempt to "douse overheating fuel rods". Storage pools at reactors 5 and 6 are also said to be leaking.

Now, as to the dangers, "meltdown" is not an issue. The great danger is that the spent fuel - as the water evaporates or leaks away – will overheat to such an extent that they catch fire. The emission of combustion products could release huge amounts of high-level radiation into the air, which could spread a considerable distance. With over 1,000 tons of spent fuel stored, the potential for a serious event is high.

The effects of this, disastrous though they would be, are likely to be relatively local. We are not looking at a Chernobyl-type disaster, where an active reactor exploded, ejecting material into the upper atmosphere, which then spread thousands of miles.

Japanese authorities are, however, talking about the possibility of "re-criticality" in the fuel rods, if they have become bunched up together in such a way that critical mass is achieved, and the nuclear reaction restarts. That, as they say, could have interesting consequences, as high volumes of decay products would be emitted to atmosphere.

At the moment, though, the worst case scenario would appear to be localised, high level emissions, sufficient to make the plant and the immediate area uninhabitable for some years, with dangerously high levels of radiation downwind of the reactor for tens and possibly even a hundred or so miles. With the wind in the wrong direction, residents of Tokyo could be at risk.

On the plus side, engineers have been reported as having reconnected the plant with an electrical supply, and are working on restoring on-site pumping facilities, which may take the edge off the crisis.

Altogether, then, we have a very serious crisis here, even if it is by no means as serious as some of the more lurid press reports would have us believe. Latest reports suggest that the efforts so far have been "somewhat effective" and it could be that the worst of the crisis is already over.

The media though, has not come out of this well. The lack of technical knowledge of so many of the writers, together with an obvious enthusiasm for disaster scenarios has so distorted the coverage that most journalism, rather than informing, has been a barrier to understanding.

It is unlikely that any lessons will be learned. They are beyond that, so utterly self-absorbed that not one of them would even begin to understand that they have done anything wrong. And thus this period of exaggerated and inaccurate reporting marks another step in the decline and fall of the industry.