Can't we give the gentleman away? 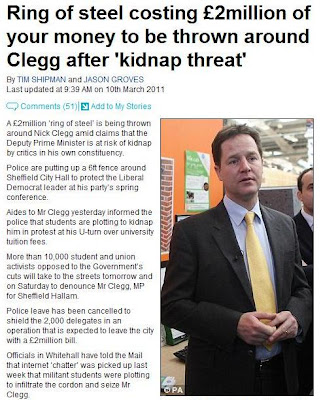 A £2 million "ring of steel", we are told, is being thrown around a "defiant" Nick Clegg, amid claims that he is at risk of kidnap by critics in his own constituency. Police are erecting a 6ft fence (note the "feet" for this Euroslime trash) around Sheffield City Hall to protect the Lib-Dim leader at his party's spring conference.

This comes about after "aides" to Clegg yesterday went running to the plod to tell them that students are plotting to kidnap him in protest at his U-turn over university tuition fees. More than 10,000 student and union activists opposed to the Government's "cuts" will take to the streets tomorrow and on Saturday to denounce the Clegg, MP for Sheffield Hallam.

Police leave has been cancelled to shield the 2,000 delegates in an operation that is expected to leave the city with a £2 million bill. Clegg's staff yesterday reported the concerns to his personal protection officers but denied that special anti-kidnap precautions are in place. But the huge cost of protecting Mr Clegg from his own constituents is the greatest humiliation for a leading politician for "a man of the people", since it was learned that he now needs an armoured car to go about his business.

This is a man to whom most people would not even donate used toilet tissue if that was the price of his ransom, yet such are the fading powers of the élites that they will use our money to keep the man safe. The politicians may now care to reflect, that when only brute force, armed policemen and multi-million pound barriers keep their grateful voters from expressing their appreciation, they may not quite be getting their messages through.

It is Clegg, however, who labels himself "defiant", in an "exclusive" interview in the Yorkshire Post (meaning no one else wanted to interview him). But how very easy it is to be "defiant", when you have a £300,000 armoured car at your disposal, and £2 million-worth of personal security. People such as these do not know the meaning of the word.