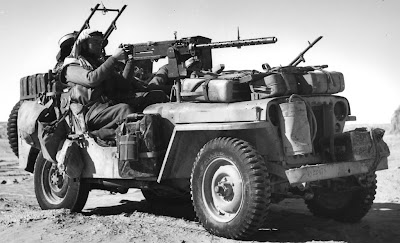 Richard Norton-Taylor, of The Guardian is complaining about "the gung-ho and arrogant attitude that contributed to the botched operation in eastern Libya over the weekend." Actually, I've always found Richard Norton-Taylor pretty arrogant, but that doesn't stop him being right. There really do seem to have been some extraordinary goings-on.

Why, as reporters in Benghazi asked on Sunday, he says, did a unit of six SAS troops, apparently in the company of two "diplomats", have to be dropped by helicopter in the desert in middle of the night when they could have walked down the gangplank of the destroyer HMS York on the Benghazi quayside?

It is all rather ironic though. Col. Stirling's SAS was actually founded in the Western Desert, and its first mission in November 1941 was a complete disaster. Perhaps this lot simply felt that had to be true to their tradition. However, its second mission - in Libya - was a success. But then they relied on the Long Range Desert Group for transport and logistics. There has to be a lesson there, even if I'm not sure what it is.

UPDATE: It now turns out that the mission was personally approved by the man pretending to be a foreign secretary, William Hague.

He had, we are told, approved the operation "in the normal way". It was impossible to discern from the briefing given to the media whether Euroslime Dave had been specifically informed in advance. The pretend prime minister and the pretend foreign secretary are in constant contact, though, so it must be assumed that Dave knew about it some time before it went belly-up.

We really cannot express any surprise at this. The trade mark of these people is incompetence - they are simply acting in character.