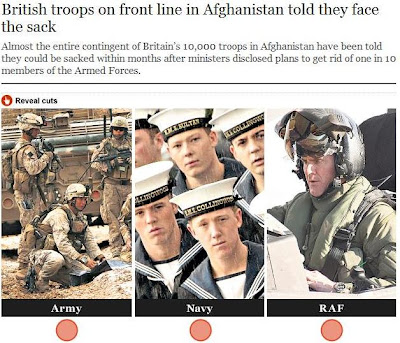 I've said it before, but as Euroslime Dave, backed by the Catastrophic Clegg unveil their agenda, I really do hope that the boys and girls of the ARRSE forum, the clever little Speccytwats, and all the others who were screaming about Labour "underfunding" on defence are now eating their words.

These deep cuts in manpower go way beyond saving money. If we were that desperate – and we are – we could cut foreign aid, we could cut the EU "contribution", we could clamp down really hard on benefit tourism, and much, much more.

All that would more than make up for the cost of keeping our minimal armed forces together. What you don't do is take out irreplaceable core capabilities, not even as a very last resort.

But that isn't what it's about. We are seeing here structural cuts which remove the UK's ability to act independently as a nation, and to project our foreign policy. We have moved from independence to a transitional stage where our capabilities have been removed and there is no replacement.

Soon – as has has been hinted - the real agenda will increasingly emerge: "We will be moving into an era of sharing capabilities with our European allies. The days of being able to do everything are long gone."

Our nation is standing blindfold at the edge of an open grave, its hands bound, with a pistol at its head called European integration. Yet, even as our ruling classes seek to destroy the last vestiges British independence, the media slumbers on, never mentioning that elephant in the room.

But then, what do you expect of a newspaper which illustrates its story with a picture of US troops? And who can escape the irony of the picture showing sailors with HMS Collingwood capbands, a shore establishment with a mission statement: "to train Officers and Ratings for the Fleet who are ready to fight and win".