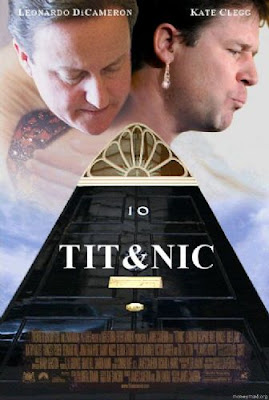 Discussions with people close to the centre yesterday brought an observation that it has taken the Cleggerons less than a year to get into the kind of predicament that took Labour at least six years.

To that, you can add to that the news that the Lib-Dims have gone into the red for first time in history and are having to quit their historic Cowley Street HQ – although it does not stop there.

In what should be his hour of glory as he is about to address his spring conference, Eurotrash Clegg is having to tell his party to "hold your nerve".

This is against "the humiliating backdrop" of sixth place in last week's Barnsley Central by-election, and a YouGov survey that puts the Lib-Dims on just 9 percent, trailing well behind their Conservative coalition partners on 34 percent and Labour on 45 percent.

Given just how low Labour's stock had fallen last year, and the lacklustre performance of the Miliband Bros, it is absolutely incredible that Labour is actually showing an 11-point lead, the largest YouGov result since the election.

Just add a tiny but important detail on the Tories – that Ruth Lea has decided not to renew her membership – and you get another facet that goes towards the bigger picture.

On this, I think it can be said with confidence that you would have to go a very long way back before you found an administration with less of a popular mandate, with less electoral support and enjoying less public confidence – and with less grass-roots backing.

This coincides with a period of acute tension, where the Cleggerons are having to implement a programme for which they have no mandate, precious little media support and which would be, even in the best of times, unpopular, having at the same time alienated some of the core interest groups.

If one were now to attempt a prediction on where this is all going, one might be tempted to say that the Cleggerons have the one advantage – their direction of travel is very clear and certain. The trouble for them is that the picture tells you what that direction is – all the way down, without stopping.

How interesting it is that the imagery came from here, just as I was about to look for a Titanic representation – a report on electoral meltdown in a Salford local council by-election. As the Lib-Dims plummet to the bottom, it will come as no surprise to anyone here that we will be applauding it on its way down – even if we are then left in a rather cold and draughty lifeboat.

But what this does tell us is that a political rescue plan is now beginning to take on a degree of considerable urgency, as the traditional political merry-go-round is no longer providing any answers to our predicament. We need some serious answers, or we as a society will be following the Lib-Dims to their watery grave.