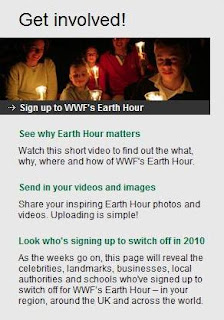 Via Tom Nelson we get a report from the Fiji Times on the fatuous WWF Earth Hour campaign. This year, it aims to reach one billion people in more than 1,000 cities encouraging them to cast their vote for the earth by turning off their lights for an hour on 27 March.

As of 14 February, however, only 579 cities had signed up for what is already a toned down event. Nelson reports that 88 countries and 4,088 cities participated in Earth Hour 2009, ten times more cities than Earth Hour 2008, which saw 400 cities participate. The lights, it seems, are not going out all over the world. Perhaps the WWF had better stick to writing reports about glaciers and forest fires.

Another star on the wane, it seems, is our old friend Dr RK Pachauri. In a survey reported by the Hindustan Times and others, which lists the "100 most trusted Indians", former president A P J Abdul Kalam and industrialist Ratan Tata top the list. But, says the paper, among the other surprises in the list was R K Pachauri, who trailed at 61 along with TV anchor Rajdeep Sardesai.

And yet another of the mighty fallen is al-Gore. Forbes Magazine, in the persona of Henry I Miller, has him suffering narcissistic personality disorder. Amongst the signs he lists - taken from the psychiatrist's bible, the Diagnostic and Statistical Manual of Mental Disorders - is a: "pervasive pattern of grandiosity (in fantasy or behavior), need for admiration and lack of empathy, beginning by early adulthood and present in a variety of contexts."

We also get, "A grandiose sense of self-importance (e.g., exaggerates achievements and talents, expects to be recognized as superior without commensurate achievements)" and, "Preoccupied with fantasies of unlimited success, power, brilliance, beauty or ideal love; believes that he or she is 'special' and unique and can only be understood by, or should associate with, other special or high-status people (or institutions)."

Miller notes that Gore's Sunday op-ed column was entitled, "We Can't Wish Away Climate Change." Too bad we can't wish away Al Gore, he says. But ... you can always wish upon a falling star.