A multiple of insanity 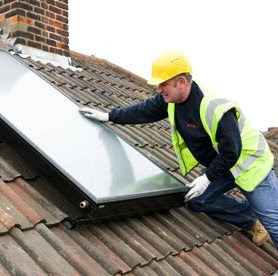 Moonbat's spat over feed-in tariffs continues with a repost from his nemesis, Jeremy Leggett, defender of the solar industry.

For once, though, we are completely on Moonbat's side. Only now is the enormity of the government's proposal beginning to sink in, with its intention to have a full two percent of UK electricity supplied from micro-generation by 2020. This will largely be delivered by solar panels, the most profitable option for small installations.

Actually, solar panels are one of the least cost-effective ways of producing electricity, costing £4,000-6,000 per kilowatt of installed capacity. Without massive government support, payback times (with interest) could be a hundred years or more to recoup the typical installation costs of between £3,000 and £20,000. Given that the devices have a maximum lifetime of 30 years, that would never have happened.

However, from 1 April, the government is offering 41.3p per kWh produced – a supposed "feed-in" tariff although it is paid even if the owner uses all the electricity produced. From this, it estimates that a typical 2.5kW well sited installation could earn £900 a year and save £140 a year on the electricity not used – the subsidies calculated to give a 5-8 percent return on investment.

The income from the electricity sales is not taxed so, for a higher bracket taxpayer – who would have to pay for the electricity out of earned income, the payback time can be reduced to as little as 15 years. By 2020, however, the government estimates that the subsidy – paid by electricity users – will be costing £8.6 billion annually. Since only the better off will be able to afford the installation costs, this amounts to a massive transfer of wealth from the poor to those fortunate enough to be able to buy the equipment.

To get to this state, the number of installations, currently approximately 100,000 and, up from an estimated 82,000 at the end of 2004, will need to increase to something like 7-10 million. And, as a rough estimate, the capital cost could be in the region of £100 billion – for two percent of our electricity production – with which we could buy 100 percent of our requirement in the form of brand new nuclear power stations.

It is this capital expenditure which will be defrayed by the feed-in tariff, replacing a composite scheme which included installation grants.

There was an inkling of how profitable solar was becoming last year when Guardian journalist Ashley Seager spent £8,500 on solar roof panels (having got a 50 percent grant for a system that cost £17,500) and claimed the experience to be financially rewarding.

That was before the government's feed-in tariff came into force and, when it does the owners will be able to sell all the electricity they produce at 41.3p per kWh, even if they use it all themselves.

Just how insane this really is can be seen from a similar scheme introduced in Germany in 2004 – with a 57.4 euro cent/kWh subsidy for domestic users. This pushed solar power capacity to about 9GW, delivering about 1.35 GW, or about one percent of total German production - including some massive industrial installations, which get a slightly lower subsidy rate.

But the cost has been massive. German electricity consumers last year paid more than £10 billion in subsidies, forcing chancellor Merkel to cut the tariff by 15 percent this month, with more cuts in the pipeline.

With the UK feed-in tariff – and other tax incentives – solar panels are now a good investment for anyone who can afford them, which means that there will almost certainly be a massive uptake. The government may well reach its 2020 target of two percent but the rest of us will be paying dearly for the privilege.

Even allowing for a low end installation cost of £4,000 per kW installed, the load capacity of domestic panels in the UK rarely exceeds 10 percent. This means that the 2GW needed by 2020 to make up 2 percent of our electrical production would still cost in the region of £80 billion. At this rate, no wonder Merkel finds the subsidies unaffordable. And yet, David Cameron wants not 2 but 15 percent, jacking up capital costs to a potential £600 billion.

If the current scheme is already insane, what the Tories are proposing is a multiple of insanity. And we can afford neither.