Is climate change losing us the war in Afghanistan? 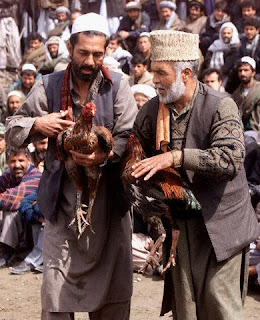 The short answer to this seemingly off-the-wall question is yes. British political and diplomatic efforts on the region are not focused on brokering the political deal necessary to secure peace. Instead, they are being subsumed by the seemingly more important need to secure an international climate change treaty.

To explore this in more detail, a good starting point is to visit a commentary in The Guardian by Seumas Milne on the war in Afghanistan. His headline is: "Voters are far ahead of the elite – so they'll get no say", with a fairly descriptive strap line which declares: "Afghanistan should be at the heart of the election campaign. But it won't be because the main parties all support the war."

Particularly intriguing, though is his observation that, "in the coming general election, this ever more bloody conflict is unlikely to intrude into the heart of the campaign, except in well-rehearsed spats about equipment and funding."

Milne then argues that, "For all the promise of a great national debate, don't expect one about the life-and-death struggle on the plains of Helmand. The reason is that, unlike in the case of Iraq, all three main parties are signed up to carrying on with a war the public has decisively rejected."

You can take that latter comment with a pinch of salt – Milne is quite clearly "anti war" and that obviously colours his argument. But the overarching point made is sound. Political arguments – as yesterday at PMQs – are corralled into the narrow confines of "well-rehearsed spats about equipment and funding."

Almost certainly by design, the parties have decided not to debate the "big issues", amongst them being whether we should be there or not. But, between the narrow focus on equipment and funding, and the question of whether we should be in Afghanistan at all, there is another level of debate – our strategy in the region. That too is not being debated.

Thus, as with so many issues, there is that leaden, unspoken consensus, where a wide range of issues which could help voters distinguish between parties are simply not aired, reinforcing the impression that they are "all the same", except in that tiny, claustrophobic patch they have chosen for their battlegrounds.

As far as Afghanistan goes, this leaves us with the bizarre situation where the leader of the opposition rails against the prime minister over things for which he is not directly responsible – or, at least, culpable – while ignoring the bigger issues, such as strategy, for which he is.

However, even that might be a fond hope. The UK line appears to be to adopting the US strategy, while pretending all along that it is one we thought of as well – if not first – and are perfectly content to follow. Forging an independent strategy could well be above Brown's pay grade, as indeed it would be for Cameron if he ever got into No 10. Hence, it is perhaps best not to talk about it.

If that really is the case, then it is a complete dereliction of duty – to the British nation and the troops who are fighting in our name. The United States is relatively new to the south Asia region, has little feel for the subtleties and has no in-depth experience of the politics.

By contrast, as an ex-colonial power, in theory at least, the British have a wealth of experience and an institutional memory which goes back centuries. The policy lead, if it is to come from anywhere, should be provided by the British.

Where this is particularly appropriate and necessary is in our relationship with and understanding of India, the great elephant in the room of Afghan politics. Already, Indian officials are prepared to admit privately that which is obvious to informed observers – there is a proxy war being played out between India and Pakistan on the canvass of Afghanistan.

Some will aver that this is the main driver of the present conflict and it is certainly the case that there will be no long-term (and therefore any) resolution to the instability in Afghanistan until relations between India and Pakistan are normalised.

With that, one might expect British diplomatic activity to be intensively focused on regional conflict resolution. But what is very evident in the Brown administration is the relatively light footprint and that the emphasis is elsewhere.

Informed observers in the region note that the primary policy objective of the Foreign and Commonwealth Office – and that of its partner in crime, the Department for International Development (DFID) - seems to be climate change. Far more resource, in terms of manpower and aid, is going into India to address that issue than is being devoted on Afghanistan, even to the FCO having an official on permanent detachment to Dr Pachauri's TERI in New Delhi.

That this should be the case is hardly surprising. While the resolution of the Afghan conflict is important, it is mostly seen in terms of an expression of support for the US, and thus an extension of Anglo-US relations. Thus, the foreign policy objective is to do enough to maintain credibility with the US. Winning is not an imperative.

On the other hand, the achievement of an international agreement on climate change is a major foreign policy objective of the UK, both on its own account and through the prism of EU policy - where the EU would probably be quite content to see the US-led venture in Afghanistan fail. Furthermore, it has a vital economic dimension. Unless other countries can be prevailed upon to follow the same suicidal course as the EU in the aggregation of damaging climate mitigation policies, the economic consequences could be dire.

In this, India is a key player, not only because Dr Pachauri is chair of the IPCC but because the goodwill of the Indian government is essential if a global deal is to be brokered. And, insofar as any nation can claim such a role, India is also key to that other major player, China.

The confounding factor here is Afghanistan, and more particularly, Indo-Pak relations. Fraught at best, India is extraordinarily sensitive about these (as indeed is Pakistan), to the point of institutional paranoia. It resents anything that looks like external interference – especially from an ex-colonial power such as Britain, of which there is still great suspicion and some resentment.

The upshot of this is that Indian involvement in Afghanistan is a no-go area for British diplomats and the government. It is simply not discussed at any meaningful level. The climate deal takes precedence and the risk of souring relations over Afghanistan is too great to be taken.

We thus end up in a bizarre situation where our troops are committed to fighting in Afghanistan in a conflict which by general accord cannot be won by military means and which requires an overarching political solution. In any such solution, India has to play a major part or it simply will not work. Yet, to protect its climate change agenda, the British government is not prepared to address the Indian government on this pressing issue.

Coming full circle, this could explain the reluctance of Brown to entertain a public debate about strategic options for Afghanistan, preferring instead to conserve political capital and follow the US strategy. Flawed though it may be, it avoids any confrontation with India.

This would certainly explain the Conservatives' reluctance to engage as they also hold climate change policy in a pre-eminent position. Although they would never admit it publically, this is far more important to Cameron than sorting out Afghanistan, especially if the real objective of that adventure is maintaining "face" with the Americans.

Putting this all together, there is a case to be made that British troops in Afghanistan are dying not for peace but for the greater cause of an international deal on climate change. In such a cause, of course, troops are expendable – a small sacrifice to make in the titanic battle to save the planet.