The ice floes of reality 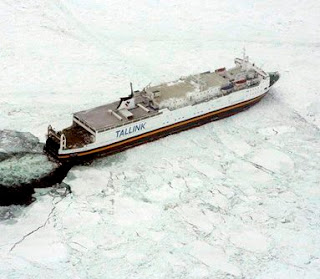 The news of the shipping trapped by ice in the Baltic could not have come at a worse time for the warmists.

They are desperately trying to mount a counter-attack, with Peter Stott of the Met Office Hadley Centre asserting that there is an "increasingly remote possibility" that human activity is not the main cause of climate change.

Needless to say, Stott brings nothing new to the table by way of research, relying merely on a review of 100 or so previous studies that purport to track changes in the earth's climatic system. The recycled material, however, is dressed up in new clothes, labelled "optimal detection", which we are told shows "clear fingerprints of human-induced global warming."

Unfortunately for Stott, he relies on the usual poster children, highlighting not least Arctic sea ice cover, his bleatings having to compete with reports of ice-bound ferries and cargo ships.

Sceptics can, of course, make hay with these reports - as indeed the warmists have exploited any number of transient weather phenomena – but it is germane to note that the Baltic incident is partly the result of gale-force winds which are compacting the ice and making it difficult to navigate.

Something very similar happened during September 1983 in the Northeast passage, when an unusually early freeze-up and persistent northwesterly winds drove heavy multi-year ice into Proliv Longa and against the Siberian coast of Chukotka. Dozens of ships were trapped, creating a major emergency which lasted several months, a fascinating account of which was published in the journal Arctic in 1985.

This brings home the salient point that mass shifts in Arctic ice have more to do with wind patterns than they do temperature, something Anthony Watts helpfully confirms in a recent post. As a result, Arctic ice extent is recovering from its 2007 low and is currently within a million square kilometres of normal and increasing as peak coverage approaches.

Here, then, we have a complex, multi-factoral phenomenon, but it is one which the warmists have chosen to interpret almost entirely as evidence of global warming, claiming that temperature rises are the main if not sole cause.

In dissecting the warmists' claims, one does not need to go much further than that. Their style is to assert their a priori hypothesis as fact and then to "cherry pick" disparate information to support their thesis, ignoring confounding and conflicting data – to say nothing of flawed observation.

This, interestingly, they do in the name of science, but there is nothing scientific in their method. These people are not scientists but advocates of a political cause. Thus we see them reacting in precisely that way, seeking funding to advertise their beliefs in the New York Times.

Little perhaps do they realise that, as they shed the scientific mantles behind which they have been cowering, and enter more fully the political arena, they will find that they have a deal in common with the Baltic shipping. The wind has changed and the ice floes of reality are bearing down upon them.