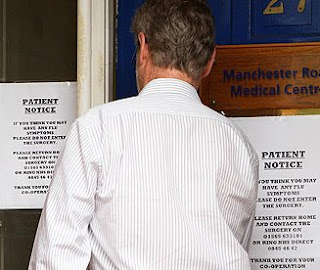 How ironic it is that The Guardian, of all newspapers, should be picking up on the "flu pandemic" scare which afflicted the nation last year.

We touched on this in late January but now this newspaper is reporting the findings of a draft report to the Council of Europe. It asserts that the World Health Organisation and other public health bodies have "gambled away" public confidence by overstating the dangers.

As to the report, it declares that, "This decline in confidence could be risky in the future. When the next pandemic arises many persons may not give full credibility to recommendations put forward by WHO and other bodies. They may refuse to be vaccinated and may put their own health and lives at risk."

As we now know, the discrepancy between the estimate of the numbers of people who would die from flu and the reality was dramatic. In the United Kingdom, the Department of Health initially announced that around 65,000 deaths were to be expected.

By the start of 2010, this estimate was downgraded to only 1,000 fatalities. By January 2010, fewer than 5,000 persons had been registered as having caught the disease and about 360 deaths had been noted.

It cannot be stated often enough, or with sufficient emphasis, that we have been there before. This is exactly a parallel with the salmonella and BSE scares – the latter with the 500,000 deaths a year forecast, with senior medical officers and "scientists" solemnly pronouncing that we were all in mortal peril.

And, of course, the media lapped it up, giving short-shrift to the "sceptics" like myself, who said it wasn't happening, wasn't going to happen and that the "experts" were talking out of their backsides.

Here we are again with global warming – the same "consensus", the same certainty from a gang of so-called experts, the strident calls from the politicians and the media, all piling in to pronounce that we are all in mortal peril. But, with the lack of joined-up thinking that so profoundly affects papers like The Guardian, they cannot see the connections.

But all these experts can't be wrong, the experts bleat. Yet, history and recent experience tells us that experts are quite frequently wrong. When a madness such as the salmonella scare, BSE, swine flu and the rest, take hold, most likely the prevailing orthodoxy will always be wrong.

So it is with global warming – but this time the scaremongers have picked an unfalsifiable theory, and falsified the evidence, so that their dishonesty is concealed. Despite that, the dynamics are the same – there are huge parallels, and only the retarded and the self-interested can fail to see them.