The group-think with no clothes 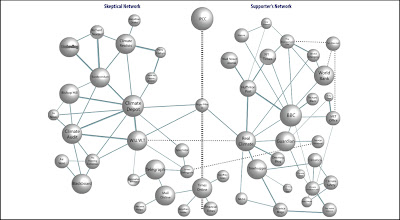 "A small group of dedicated people coming from a diverse range of positions and perspectives but working together as a loose federation held together by shared values and beliefs succeeded in accomplishing the most impressive PR coup of the 21st century."

That is the view of Prefero, an organisation which describes itself as a "global marketing agency that delivers extraordinary consumer experiences."

It is responding to the publicity picked up by Watts up with that? last week. Then, it had been disclosed that the agency had been commissioned by Oxfam to produce a report which, according to the left-wing political blog, LeftFootForward dealt with "combating the growing influence of climate sceptics".

The agency, we learned, had "shed new insights into the way climate sceptics' networks operate," and, although the report has not yet been published, we were treated to the "network map" reproduced above. This purports to be part of the analysis of online coverage of the Climategate "debacle", tracking its progress from "fringe blogs" to mainstream media outlets over the ensuing weeks and months.

We can only assume that the "map" is genuine and not an elaborate spoof, designed to mislead the sceptic "community". But if it is genuine, that rather calls into question the agency's claim to be a "collective of brilliant, original thinkers". It is a shoddy, inaccurate and superficial piece of work.

Not least, one of the major players in the early days of Climategate was Devil's Kitchen, which did some of its best work then, and helped spread the word with its cogent analysis. But this site does not even appear on Prefero's radar.

By contrast, this blog, its author and "umbrellog" are shown separately, when they are effectively the same entity. But the direct links shown to other blogs are entirely imaginary, as indeed is the link between Geoffrey Lean and The Times.

What is not shown, however, is the very direct link between Booker and myself, and thence to The Sunday Telegraph. Furthermore, the agency seems incapable of distinguishing between the Sunday paper and The Daily Telegraph which hosts writers with diametrically opposing views, with Lean and Delingpole writing for the same title.

However, if Prefero did set out to portray an accurate representation of the "loose federation" they claim to have detected, then the map is an extremely useful aid – not for what it tells us about a mythical "federation" but for what it tells us about the warmist perceptions of their opposition. To that extent, it is a map of their innermost thinking. They reveal more about themselves than they do about us.

Then, even the general "take" of the agency is a gross distortion. We achieved our coup, it says, "by significantly influencing public perception of anthropogenic global warming by single-mindedly applying concerted and consistent pressure at critical junctures in the media ecology here in the UK and abroad."

Here, I cannot speak for others, but my perception is that we did no such thing as "single-mindedly applying concerted and consistent pressure at critical junctures in the media ecology here in the UK and abroad." Individually, we saw a story and ran with it, as much in competition with each other as acting in concert.

And where Prefero also gets it wrong is in its portrayal of the network. The links exist not so much between the different blogs as between the blogs and their readers – it is the readers who form the "community", bouncing between blogs and MSM. They also created an invisible network of e-mail correspondence – which was at least as important in disseminating information.

And while it is flattering to be credited with "accomplishing the most impressive PR coup of the 21st century," this is probably overhyping the achievement. The most important thing about Prefero's input is that it betrays (one assumes) the ignorance of our opposition, and their failure to understand what they are dealing with. Not, of course, that we really understand the phenomenon of which we were part, other than to know that the Prefero portrayal is false.

That said, the purpose of the study – or so we are led to believe – is an attempt by Oxfam to understand the blogging and new media phenomena, specifically in order to replicate it in the service of the warmist cause. This is something also that the political parties have sought to do – without any real success. Like as not, the warmists will fail as well.

The reason might be that none of us can really claim to understand the medium with which we work – why some blogs take off and why some don't, why some posts go "viral" and other, apparently better posts do not, why the media picks up on some stories and not others.

But then, the ultimate answer is perhaps that blogging as a genre is not capable of analysis. The blogosphere is not a single entity but a disparate, anarchic group of individuals with their own motivations, skills and capabilities, each bringing their own individuality to the table.

And that might be the reason why the warmists will fail – as indeed will the politicians. This is group-think versus individualism. The former can never replicate the latter and nor can it win. The individual will always prevail – after all, it only took one boy to point out that the emperor had no clothes.