The face of reason 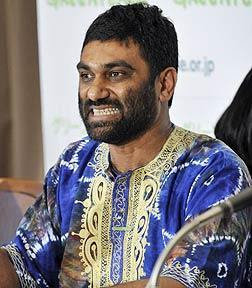 This is Kumi Naidoo, described as the head of Greenpeace. He – or so we are told – argues that it is justifiable to break the law in order to alert people to the threat of climate change.

He is speaking in defence of his activists, 54 of whom have been charged with trespass after spending the night on the roof of the Houses of Parliament in October last year, and says his organisation has no intention of scaling back its tactics.

Actually, I have no problem with the idea of breaking (mad-made) laws. The concept of civil disobedience is honourable and well-established. Much of the progress in what passes for civilisation has been made by men and women of principle refusing to be bound by outdated or unjust laws. And I have personally broken too many such laws in my time to be able to sit on my high horse and condemn anyone else for doing what they believe to be right.

However, there is a distinct and unwholesome tinge to Mr Naidoo's brand of civil disobedience. In the general run of things, the tactic is normally employed by individuals or groups who believe their rights are being infringed or that they are being oppressed by the state. In Mr Naidoo's case, he is seeking to impose his belief system on the rest of humanity, enlisting the state in his cause, to impose expensive and oppressive measures on us all.

Thus, if Mr Naidoo believes that breaking the law is justifiable – as a matter of principle - in pursuit of his beliefs, he can have no reasonable objection if those who wholeheartedly disagree with him adopt exactly the same tactic, in opposition to him and his followers.

And if down that slippery slope we must all travel, he must not be surprised if civil disobedience then extends to refusing to obey any laws that are passed as a result of his activism. "It's only when decent men and women are willing to stand up, put their lives on the line and take strong, vibrant action that the agenda can move forward," he says.