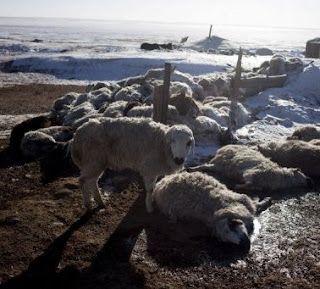 It says something of the narrow-minded obsessiveness of the WWF that, despite the state of emergency in Mongolia, its only interest in the country seems to be that its fatuous Earth hour will stretch from "Mongolia to Argentina ... ".

In their freezing hellhole, there would probably be many hundreds of thousands of Mongolians who would be extremely happy to turn off their lights next Saturday as part of this WWF showboating, but for the minor detail that they don't have any and, even if they did, there isn't any electricity anyway. Despite that, no doubt, WWF will be able to claim as a success the fact that there will be so many darkened areas in Mongolia next week.

Some credit must be given, therefore, to The Sunday Telegraph which yesterday ran the story of the disastrous "druz", under the by-line of Peter Foster. It also told us that the UN and "aid organisations such as Save the Children" have issued an urgent appeal for assistance.

The reference to this charity is deeply suspicious, though. Its website makes no reference to an appeal and its last known direct involvement seems to have been in 2009 when it had teamed up with The Sun on a "Knit One Save One" campaign "to create bonnets to keep warm the little ones in harsh climates".

In the more recent past, it seems to have been far more interested in gender equality in Canada than the children of Mongolia.

What, of course, is of special interest (to this blog) is how campaigners and self-interest groups have sought to invoke climate change as the main threat affecting the country, typically the World Bank with some evidence that much of the external support is being directed to "climate mitigation" measures rather than basic development needs.

However, Peter Foster seems to redress the balance somewhat, remarking how the numbers of animals on the pastures has doubled to an unsustainable 44 million and that grazing land has been chronically over-used, particularly by destructive, grubbing goats bred to feed the international demand for cashmere wool.

With the crisis continuing to develop, this has prompted The Economist to have a closer look at what is going on, and it reports on a system of leasing pastures to Chinese companies which harvest the hay and ship it across the border, and a lack of roads which stops the herders marketing their produce at the best price, leaving them chronically poor.

To that extent, the current problems – and the lack of resilience, such as the current shortage of fodder – is in part man-made, something even the World Bank seems to acknowledge. Foster has it from Mongolian elders who remember the great dzuds of 1968 and 1944, and say the ability of modern Mongolian farmers to cope with the disaster has been diminished by a combination of greed and neglect.

Most telling of all though is that in this poverty-stricken country, the economic cost of this national disaster is put at $60 million, some $20 million less than the WWF have spent on not saving the Amazonian rainforest. In terms of where money might best be spent, not for the first time are moved to observe that priorities have become more than a little distorted.