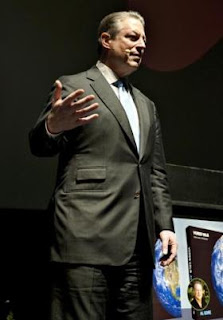 This is The Washington Times in full flow, telling us that the greatest scandal connected to global warming is not exaggeration, fraud or destruction of data to conceal the weakness of the argument. It is those who are personally profiting from promoting this fantasy at the expense of the rest of us.

Al Gore is the most visible beneficiary, it tells us, rehearsing familiar but nonetheless telling points, not least the fact that this "multimillionaire climate dilettante" has been given a free pass by reporters, who have refused to ask him hard questions about the degree to which he was profiting from the panic he was causing. The paper picks up on Pachauri as well, and his personal cash machine, The Energy and Resources Institute.

However, the greatest potential profits are in the ill-defined "carbon trading" industry, currently valued at $126 billion. Gore, of course, is heavily involved with his Generation Investment Management LLP, which he chairs. Pachauri, through the Chicago and now the Indian climate exchange also has his fingers in the till. Thus, says the paper, given the clear conflicts of interest of those who both promote and profit from climate-change alarmism, the 2007 Nobel Peace Prize should be rescinded.

This, though, is only the half of it. Coming up fast are the NGOs, which have discovered for themselves the huge money-making potential of these schemes, and are now working to cut themselves into the deal. This is not entirely unrelated to the hype on the Amazon rainforest, where there are billions to be made. I am working up a story on this and hope to be able to roll it out this weekend, alongside Booker. Watch this space.