Environmentalism has been hijacked by the warmists 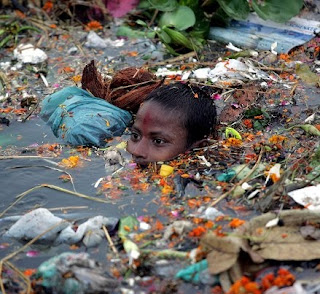 John Michael Wallace, professor and former chairman of the Department of Atmospheric Sciences at the University of Washington, writes of the growing and serious environmental crisis in India.

We have allowed, he says, the IPCC assessment reports to become the dominant vehicle for representing the views of the scientific community on a widening range of environmental issues.

In the IPCC terminology, he adds, "symptoms of environmental degradation, regardless of their cause, are labelled as impacts of climate change, and the societal response to them is framed in terms of mitigating and adapting to climate change."

Thus, while scientists still write papers and speak to the media about environmental concerns outside of the purview of the IPCC, Wallace tells us that, "with so much of the world's attention riveted on climate change there is a lack of institutional infrastructure for calling attention to other issues."

The problem though is that labelling issues such as reduced agricultural productivity, loss of biodiversity, pollution and the looming shortage of fresh water as "impacts of global warming" leaves the public confused and susceptible to propaganda by groups who oppose environmental regulation of any kind.

The "denialists" can then trivialise the entire environmental crisis, says Wallace, simply by casting doubt on the scientific consensus on global warming.

However, this is more than, and not even, a question of "denialists". There is a strong constituency in India – not least the industrial complex – which does not want attention focused on broader environmental issues. It is quite content to see "climate change" in the frame, if only because this can be blamed on the white man, thereby providing absolution for local sins - and a source of income.

We touched on this in a piece earlier this month, arguing that India (and many other developing countries) have far more important things to concern themselves about than global warming.

Wallace does not go quite that far, but he does say that the current stalemate on seeking environmental improvement is likely to persist as long as scientists allow climate change to dominate the environmental policy agenda. The discussion of adaptation and mitigation options in the policy arena, he maintains, needs to be reframed so that it addresses environmental degradation and sustainability in the broad sense, not just the impacts of climate change.

That much alone is refreshing – but it is not enough. Wallace is touching on a massive problem. Warmism has hijacked the entire environmental agenda, setting the cause of real environmental improvement back decades.

So it is not a question of "reframing". The two agendas cannot live side-by-side. True environmentalists need to reclaim their ground from the warmists, who are the enemy of the environment, distorting and perverting a worthy cause for their own ends.