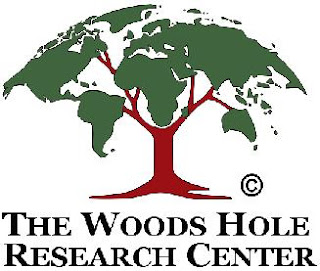 In response to Booker's piece last week on the £60 billion WWF "REDD" scam - amplified in my parallel post - we have today a thoroughly dishonest letter from William Y Brown, president and CEO of the Woods Hole Research Center.

There are two parts to the letter and in the first – which we deal with in this post – Brown complains of Booker describing the Center as a "global warming advocacy group". We are, he responds, "a widely respected scientific institution whose scientists publish dozens of peer-reviewed scientific articles annually in the world's most prestigious scientific journals, including Science and Nature, with much of the work supported by the National Science Foundation and NASA."

The dishonesty of this claim is transparent, evident from the center's own website where it tells us that it is an "independent, non-profit institute focused on environmental science, education, and public policy." As to its "mission", it seeks to "conserve and sustain the planet's vegetation, soils, water, and climate by clarifying and communicating their interacting functions in support of human well-being and by promoting practical approaches to their management in the human interest."

Even the most dispassionate analysis cannot find in the center's own text any support for its proposition that it is a "scientific institution". It seeks to "conserve and sustain", thence by "clarifying and communicating". It does so "in support" of an objective, and it is concerned with "promoting" practical approaches. It is also focused on "public policy".

Laudable though these activities might be, they are not science. This is advocacy, where, effectively, scientific method and personnel described as "scientists" are used as tools to promote a "mission". And, even without that, the background of its founder, George M Woodwell and his links with other advocacy groups tell you exactly where it stands.

Woodwell is an ecologist "with broad interests in global environmental issues and policies." He was also a founding trustee and continues to serve on the board of the Natural Resources Defense Council. He is a former chairman of the board of trustees and currently a member of the National Council of the WWF, a founding trustee of the World Resources Institute, and a founder and currently an honorary member of the board of trustees of the Environmental Defense Fund.

Then, as regards its advocacy operation, it tells us:

The Center's Program on Science in Public Affairs focuses on the importance of bringing science to bear on policy formulation and on the adoption of international agreements governing these topics. As a result, our staff has been intensely active in scientific and policy research surrounding both global climate change issues, and issues concerning world forest resources. Our efforts emphasize the importance of participation by developing countries in international legal discussions, the resolution of north-south conflicts, and the role of nongovernmental organizations in international processes.

This confirms, in their own words, the role of their "science". They are using it "to bear on policy formulation and on the adoption of international agreements governing these topics". In other words, it is not "science" as such, but the use of scientific method as an advocacy tool, the end being, as the center clearly states, the attainment of political objectives.

Richard Lindzen had them sussed many years ago, when he wrote:

It is, of course, possible to corrupt science without specifically corrupting institutions. For example, the environmental movement often cloaks its propaganda in scientific garb without the aid of any existing scientific body. One technique is simply to give a name to an environmental advocacy group that will suggest to the public, that the group is a scientific rather than an environmental group. Two obvious examples are the Union of Concerned Scientists and the Woods Hole Research Center.

To set up an advocacy organisation with all the tools and appearances of being a scientific institute is a clever technique, but it is essentially dishonest. To then pretend that its output is "science" is also dishonest. And that is precisely what the second part of the letter does, which we will deal with in a separate post.