The biggest mistake yet 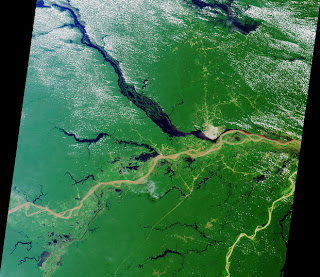 When it was published in 2007, the paper in the journal Science by Saleska et al caused quite a stir. It suggested that, contrary to expectations, the Amazon rainforest had "greened-up" in response to a short, intense drought in 2005.

These findings, wrote the authors, "suggest that Amazon forests, though threatened by human-caused deforestation, fire, and possibly by more severe long-term droughts, may be more resilient to climate changes than ecosystem models assume."

The paper was widely reported, not least by Science Daily on 26 September 2007. Drought-stricken regions of the Amazon forest grew particularly vigorously during the 2005 drought, according to new research, this magazine announced. It told us that the counterintuitive finding contradicts a prominent global climate model that predicts the Amazon forest would begin to "brown down" after just a month of drought and eventually collapse as the drought progressed.

Principal author of the paper, Scott R Saleska of the University of Arizona, was quoted, saying: "Instead of 'hunkering down' during a drought as you might expect, the forest responded positively to drought, at least in the short term. It's a very interesting and surprising response." Co-author Kamel Didan added, "The forest showed signs of being more productive. That's the big news."

Unfortunately, although by contemporary measures, the science was "sound" – i.e., peer-reviewed - it was also completely wrong. That, at least, is the finding of a paper in the current edition of Geophysical Research Letters by Samanta et al. The results of the earlier team, obtained from analysis of satellite-derived data, were "irreproducible" owing to inclusion of atmosphere-corrupted data.

Using a new and improved version of the satellite-derived data from which clouds and aerosols from biomass burning had been filtered, this team found approximately 11-12 percent of the drought-stricken forests display greening, while, 28-29 percent showed browning or no change. For the rest, the data were not of sufficient quality to characterise any changes. Such changes were also not unique - approximately similar changes were observed in non-drought years as well.

Furthermore, they also found that sunlight levels did not increase during the drought, contrary to speculation in earlier reports, and that there was no correlation between drought severity and greenness changes, contrary to the idea of drought-induced greening. Thus, they conclude that the Amazon forests did not green-up during the 2005 drought.

This conclusion is significant at several levels. At the most basic, it reinforces the general point that, just because a study has been published in a peer-reviewed scientific journal, even one as prestigious as Science, it does not mean it is true.

At another level, on the face of it, this could be considered bad news for sceptics. When the Saleska paper was first published, it was widely hailed because it suggested that the forest was less sensitive to drought than many of the climate models were suggesting. Take Saleska out of the picture and, in theory at least, that returns us to the status quo.

However, where the Samanta paper helps is in describing a lack of variability in the forest canopy through a range of conditions, suggesting – in virgin rainforest, at least – a lack of sensitivity to drought, rather than a specific and anomalous response to drought conditions. In other words, this paper also "contradicts a prominent global climate model" - that predicts the Amazon forest would begin to "brown down" after just a month of drought and eventually collapse as the drought progressed – albeit in a different way.

That certainly seems to be the view of the paper authors, articulated by one of them, Sangram Ganguly from the Bay Area Environmental Research Institute, affiliated with NASA Ames Research Centre in California. He is cited as saying, "Our results certainly do not indicate such extreme sensitivity to reductions in rainfall."

Boston University Professor Ranga Myneni, senior author of the paper, notes that: "This new study brings some clarity to our muddled understanding of how these forests, with their rich source of biodiversity, would fare in the future in the face of twin pressures from logging and changing climate."

That actually seems to be going too far. Too little, it seems, is known about the ecology of the Amazon to make such a bold assertion. Nothing in the study would suggest how the forest would fare under the pressure of continued logging and clearance for agriculture, which are demonstrably the greatest "threats" to the Amazon rainforest.

On the other hand, it would definitely seem to contradict the IPCC assertion that up to 40 percent of the Amazonian forests could react drastically "to even a slight reduction in precipitation".

I am troubled, therefore, by the confident assertion of the IPCC that the underlying science behind this claim is secure. Having spent the best part of a day on a largely fruitless review of diverse papers on the subject, it has not proven possible to find anything which does not present the decline of the forest in terms of severe and continued drought, combined with logging and clearance, which has the effect of predisposing the forest to fire.

Reviewing several papers by Nepstad, who seems to be one of the pre-eminent researchers in the field, what particularly stands out is one of his most recent – in February 2008 – published by The Royal Society. Headed, "Interactions among Amazon land use, forests and climate: prospects for a near-term forest tipping point", even there he is writing about "severe drought".

Even in his support of the IPCC statement on the Woods Hole Research Centre website, where he is described as a "senior scientist", Nepstad refers to "new evidence" of the full extent of severe drought in the Amazon. On the basis of that, he estimates that "half of the forest area of the Amazon Basin had either fallen below, or was very close to, the critical level of soil moisture below which trees begin to die in 1998."

Intriguingly, in his 2008 paper, Nepstad writes: "little is known about the spatial and temporal patterns of drought in moist tropical forests, and the complex relationships between patterns of drought and forest fire regimes, tree mortality, and productivity." Going full circle, that then is echoed by the opening lines of the Samanta paper, which tells us: "The sensitivity of Amazon rainforests to dry‐season droughts is still poorly understood".

Trying to be as balanced as possible, one has to conclude that, either we have missed something pretty fundamental, or simply that the confidence of the IPCC in the science – its version of it - is unwarranted. Either way, the IPCC owes us an explanation, and a degree of clarity about precisely how it reached its conclusions on the possible fate of the Amazon rainforests.

Not least, also, we need to get past the unremitting negativity of the warmists, and their assumptions – seemingly based on modelling various scenarios which have not occurred and which do not ever seem to have been experienced. On the basis of what we know, far from the Armageddon picture painted, even totally cleared land seems to recover completely within 40 years.

With that in mind, we note the robust comments of Gerald Warner who makes the case that the IPCC's failure to set up a truly independent inquiry into this and related issues is "the AGW camp's biggest mistake yet."

He is not wrong. As the inconsistencies and anomalies pile up, "circling the wagons", as the IPCC appears to be trying to do, is not going to restore the trust in the science that the warmists claim to want yet are doing nothing to achieve.