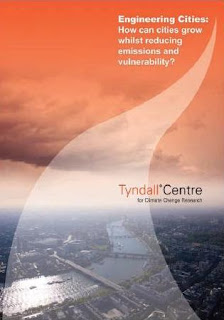 The Tyndall Centre for Climate Change is proudly touting its 40-page brochure on climate change in cities.

Cities, we are told, are concentrations of vulnerability to the harmful impacts of climate change. "They are also, directly and indirectly, responsible for the majority of the world's emissions of greenhouse gasses. 50% of the world's population lives in cities, a number that is set to increase to 60% by 2030. For all of these reasons, cities are on the front line in responding to the threats of climate change."

For further details, you must contact Professor Jim Hall, School of Civil Engineering and Geosciences, Newcastle University. By some strange coincidence, that is exactly the same detail on a grant application to the Engineering and Physical Science Council (EPSRC), which just happens to have given him £124,385 for a project labelled SCORCHIO: "Sustainable Cities: Options for Responsing to Climate cHange Impacts and Outcomes".

SCORCHIO, it turns out, is a bit of a bun fight for academics. Not only is Newcastle University a beneficiary, Professor GJ Levermore of the University of Manchester has also done rather well out of it. He has scooped the jackpot of £319,234 for his part in the project. Professor Phil Jones of the University of East Anglia also gets a look in, but is only given a measly £51,225.

And just to keep the other chaps happy and firmly on-side, we have another project in the running, called LUCID: The Development of a Local Urban Climate Model and its Application to the Intelligent Development of Cities.

Just so no one feels left out, we also have SNACC: "Suburban Neighbourhood Adaptation for a Changing Climate - identifying effective, practical and acceptable means of suburban re-design". The big money goes to Professor R Hambleton, a cool £380,454. Runners up are Dr R Gupta of Oxford Brookes University, who gets £182,046, and Professor G R Bramley of Heriot-Watt University, who has to make do with with a mere £63,638.

Mind you, they must all be just a teensy-weensy bit jealous of Dr T Drage from the University of Nottingham. With "Step Change Adsorbents and Processes for CO2 Capture", he grabs first prize in the climate change lottery with a stonking £1,580,881.

However, there is plenty to go round. Altogether, under the "climate change" theme, the EPSRC is paying out on 114 lottery winners university projects, dispensing a grand sum of £63,245,372.

And, of course, all these dedicated, independent scientists are firmly convinced that climate change is a real and present danger. How could £63,245,372 be wrong? And then there are the 912 grants from the Natural Environment Research Council on climate change. At a mere £166,500,521, that also tends to concentrate a few minds – but that is another story.