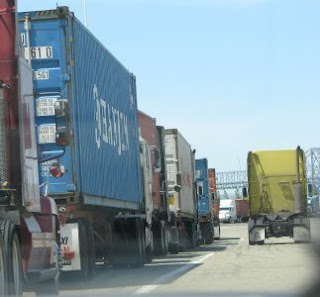 "Foreign lorry drivers should pay for road use say MPs", blares the headline in The Daily Telegraph.

Knowing the predilection of newspapers for getting even the simplest things wrong, it was necessary to check the Public Accounts Committee report to see if our gifted MPs had really said such a thing. And indeed they had, albeit in not such strident terms. What they actually said was:

We are concerned that foreign lorries use our roads and cause accidents here but, unlike British lorries, do not pay any tax. The Department [for Transport] should work with the Treasury to reduce this imbalance and find a way for foreign lorries to pay for their keep on our roads.

With that, one could not disagree, but – to put it mildly – the honourable members are being more than a little disingenuous. The report was actually about inspection standards for commercial vehicles and the MPs had inquired as to whether inspection charges could be imposed on foreign vehicles as a means of addressing the huge cost of policing the flood of foreign trucks entering this country every day.

They were in fact told that the Department had considered introducing a "European vignette scheme" under which foreign operators would be required to pay a fee for each vehicle entering the country. But the level of the fee would have been fixed by European law at a maximum of €11 and the Department's cost benefit analysis had shown that such a scheme would offer poor value for money.

The problem is that, for such a small sum, the costs of collection and administration exceed the income, so it is a non-starter. Thus, another attempt bites the dust, impaled on the altar of European integration.

A much better – and more accurate – headline, therefore, would have been: "EU blocks charges on foreign trucks," which could have been the case if the MPs had chosen to frame their report in terms of the evidence they had been given. But, as always, our representatives are never anxious to display to their adoring voters just how much power they have given away to the evil empire.

The only way, legally, the UK can impose worthwhile charges on foreign trucks is to have a non-discriminatory scheme which applies equally to domestic trucks as well, which is why the French and the Germans, with their road toll systems, can get away with it. But that would mean huge changes to the British system, which is not something the government is yet prepared to consider.

Thus, the voting public must be kept in that twilight world, a fog of incomprehension, buoyed by meaningless headlines which herald things that will never happen.

And, in the same territory, Cranmer picks up on an amendment to the law on performing rights, which is to remove the exemption currently enjoyed by charities and "non-profits" on paying license fees for performing musical works - in church halls and the like.

Set to cost these worthy enterprises some £20 million a year, no mention is made of the reason for making the change. A little investigation on behalf of Cranmer, however, reveals that the original UK rules were "non-compliant" with EU law and now, after a considerable elapse of time, the amendment is being passed through parliament to regularise the position.

Neither our gifted legislators nor the voting public are allowed to know this, of course, other than being told that the change is "a legal imperative."

Yet, in a matter of weeks now, we are to vote in a general election, supposedly to choose our next government. You can quite understand why so many people are entirely indifferent to this event. A few individuals in Westminster may swap sides in the House, but our rulers will stay the same.