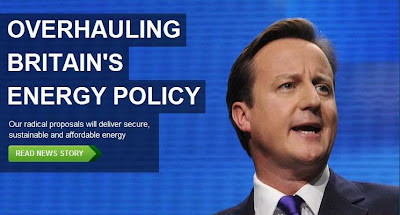 There are four tranches here in what has been a developing post, expanding as different aspects of the policy are explored. However, this is so much like shooting fish in a barrel that further exploration seems unnecessary, and a little tedious. Clearly, the Conservatives have not been able to get to grips with the idea of an effective energy policy. For what it is worth, therefore, the narrative starts here:

A lack of coherence

Whether you agree with it or not, a useful measure of a policy produced by a political party is its coherence – whether it actually makes sense within the parameters it sets itself. Taking a deep breath and diving into the Conservative Party green paper on energy policy, that is what one needs to look for – and it is something you will not find.

Page 26 sinks the entire edifice. It is there that one learns of the abhorrence of permanent energy subsidies, which "are ultimately paid for by consumers – whether as additions to their energy bills or through taxation." Energy markets, therefore, "must be sustained without permanent subsidy to any form of generation."

Thus we fund that, where subsidies are required, "it is with the restricted and time-limited purpose of overcoming the initially higher costs of the research, development and deployment of emerging technologies."

If we now go back to page 20, we see advocated not only the perpetuation of the system of feed-in tariffs that will be launched in April, but a massive extension of the system. There is, of course, no reference to cost, or duration, but the current system is based on commitments of 20-25 years.

We can, of course, play with words here, but in political terms, that length of time is, effectively, permanent. It will most likely see me out.

But there is another dynamic at play here – the careful choice of the battlefield, and the closing down of the discussion. The Conservatives chose to major on "permanence", not cost. Consumers, on the other hand, might prefer a very small "permanent" subsidy as against a massive, "non-permanent" subsidy lasting 20-25 years.

Needless to say, that is not one of the options on offer. The battleground has thus been defined – we can be ripped-off mercilessly, as long as it is not "permanent".

The illusion of value for money

For want of coherence, however, this Green Paper prefers to playing to the gallery. Choosing the theme "value for money" (page 13), and picking words they know their readers will want to see, the authors tell us that: "For businesses and for households, energy is a major component of their costs."

Government, we are thus wisely informed, "should seek to minimise the costs of energy to consumers." And so we learn that: "Trading arrangements should expose, not distort, the full costs of each form of energy."

If that was the cases, of course, the hideously expensive forms of electricity generation, such as wind solar power, would fall by the wayside. In an undistorted market, we would go for nuclear, coal and gas.

But, built into the Green Paper is an inherent and fatal contradiction. Not only do we require energy, the paper helpfully tells us that: "We are required to raise our proportion of renewably-sourced energy to 15 percent from 2.5 percent today" and, "We have committed to reduce our greenhouse gas emissions by at least 34 percent from 1990 levels".

The Conservatives have fully bought into these targets, which means massive costs. The one thing not on offer, therefore, is value for money.

Instead, contrary to their professed aversion to distorting the market, they aim to develop the UK's very own version of "cap and trade", with a floor price for carbon on the Climate Change Levy (page 16). They then intend to apply it to electricity generators, using it as a top-up charge when they think the EU's ETS carbon price is too low.

Thus, the Conservative idea for bringing us "value for money" is to take the utterly mad EU scheme and add to it with one of their own, making it even more expensive. Then, by favouring insanely expensive renewables, they aim to distort the market by making investment in the most inefficient forms of electricity generation more profitable than conventional generation.

And this is what is supposed to be a Conservative policy?

"Ultimately the cost of achieving a diverse and resilient energy system has to be paid for by consumers. Reducing that cost depends on incentivising the necessary investment in the most economically efficient way – which is what this reform will deliver," says the green paper (page 17).

"We will reduce costs to consumers and risks to investors by allowing feed-in tariffs to be used for future investments such as round three of the offshore wind development programme and wherever this would offer better value for money to the public and reduce the cost of capital for investors," it then goes on to say (page 20).

Our actions are "focused on ensuring that Britain has a more robust, more diverse, less polluting and lower cost supply of energy," we are then told (also page 20).

"Our policy aims to reduce the rise in consumer prices compared with what would happen if Labour's policies were to continue" (page 24), the legend continues.

"In the coming decade, the biggest challenge ... will be in achieving Britain’s targets under the EU Renewable Energy Directive ... Because so little progress has been made on renewables under Labour, the drive to reach our committed level now has to be made over an inappropriately compressed timetable, with all that implies in terms of cost" (page 24), is the next offering.

And so we come to: " ... we will reform energy policy with aim of reducing and offsetting the cost of the investment required. It is not possible to say that the cost of electricity in the uncertain future will be less than the cost in the past, when fossil fuels were cheap plentiful and secure. Our aim has, therefore, to be different: it is to ensure that the cost of energy will be lower than it would have been had Labour's policies continued. (page 25)"

That is our future – we will pay more, but not quite as much as we would have had to pay under Labour. But, given that the Conservatives neither cost their ideas, nor offer an analysis of Labour's costs, we only their word for it.

However, this policy makes a great play of reducing the cost of investment (in renewables) while seeking to reach the EU target. Our best hope of savings, though, is the current of muddle, where the uncertainties have dissuaded investment in the ruinously expensive renewable technology.

To that extent, the best defence we have is Labour's incompetence – if that's what it is. This allows the utilities quietly to get on with building a new generation of CCGT plants – cheap and highly efficient – while playing lip service to the renewable quota.

Thus, while Labour's headline policy might well be more expensive than the Conservative plans, its real policy is actually one of constructive failure – or "benign neglect" if you prefer.

Under those circumstances, a much desired failure to meet the renewables quota is far less expensive than a heroic success, which is cheaper on paper but in fact costs a whole lot more. If being "different" means a zealous drive towards meeting EU "commitments" at a theoretically reduced but actually massively increased cost, then we need to invest in failure.

And Labour seems to be very good at that.

In this, they recognise the problems arising from the ongoing loss of old power stations and the increasing penetration of variable forms of generation, such as wind power. If, as is the case, wind continues to be given preferential access to the grid, then conventional standby sets will only called upon to deliver at peak periods, and when the wind drops.

The power supplied by these units will be very expensive, meaning – as the green paper suggests – that "price spikes could get even spikier", as the grid has to pay eye-watering spot prices to keep the system running.

It says something of how far the Conservatives have departed from their traditional principles that they expect this to provoking public pressure for regulatory curbs on prices which could make back-up capacity uneconomic.

The problem thus having been created by the regulatory requirement for renewables (and the regulatory-mandated market distortions), this then creates price peaks in conventional generation. Yet the party seems quite at home with the idea of regulatory controls, which make the provision uneconomic.

Rather than address the original distortions, of course, the Conservatives are intent on exacerbating them, and then they propose other interventions to overcome the consequences. One of the suggestions is "to acquire the power to secure the new capacity required – either directly, as a requirement on suppliers to have sufficient contracted capacity available."

One really cannot see the government actually building its own power stations – which is what the first part of this statement appears to mean – which leaves forcing utility companies to build capacity. And how would it do that? And, bearing in mind the restrictions on government under EU state aid rules, who would pay?

Unsurprisingly, no detail is offered, leaving us to move on to another option – capacity payments. This, as the description would imply, are payments to generators simply for having the capacity available. The Labour government has already abandoned this system but the Conservatives would consider reintroducing it, with a new regulator to determine and administer the payment system.

Remarkably, this is the very antithesis of a market system. And, whatever its failings, the market is far better at judging the market. Administratively set capacity payments are more likely to distort energy prices and result in over-investment, leading to even greater costs than the system was set up to avoid. Yet here we have the Conservatives going for a statist, bureaucratic, regulatory approach.

This tells us a great deal about a party that aspires to government - perhaps all we need to know.