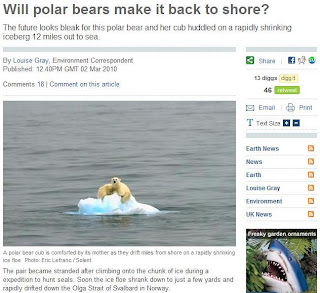 I missed yesterday's online article (pictured - click to enlarge) by the egregious Louise Gray – queen of all the press releases she surveys.

However, you could not miss it in the print edition - page 9, lead story with a large picture. It depicts poor little polar bears "stranded" on shrinking ice, written in a breathless style that conveys the impression that it had just happened. Yet, as one of my sharp-eyed readers notes, if you google the photographer Eric Lefranc you will find the picture of the two polar bears on the ice was taken in August 2007.

Another of my readers tells me I shouldn't be too hard on little Louise. But hey! She's an adult, and if she doesn't know what she is doing, she shouldn't be allowed out on her own.

One really does wonder what she thinks she is doing, though - and what she thinks she is trying to achieve. But one also wonders about the newspaper. This is news? There is nothing of importance happening elsewhere in the world? A nearly three-year-old photograph of polar bears is that important? For this and much like it, amongst an increasing constituency, The Daily Telegraph is becoming an object of derision. Progressively, it is destroying (has destroyed?) its own credibility.

Try this for an antidote.

NB: lightish blogging for a while ... I have to write a 2,000 word article on Pachauri for a Japanese magazine and the deadline looms. Normal service as soon as I've got it done. Meanwhile, read this on our wonderful, environmentally conscious EU. I’ll review the article properly later.

AND pop over to Biased BBC. More fingers in the till. This is "tip of the iceberg" stuff. How many BBC environment correspondents are taking money from the warmists – and how much are they getting?